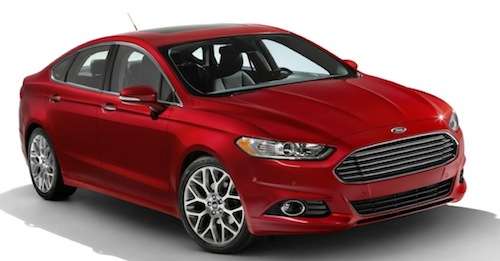 The refreshed design of the Fusion line at Ford will match performance with aesthetics, adding to the already huge success the car has proven to be.
Advertisement

The gist is Ford has done very well with its mid-size sedan Fusion line and the hybrid has helped the carmaker keep sales high. The new 2013 Ford Fusion design is both fresh and attractive, showing a more aggressive character, which surely will make it a hot item. However, the introduction of the Ford Fusion Energi is the real splash in the pond.

Technically Speaking. The much anticipated Fusion Energi plug-in hybrid (PHEV) model is finally here and promises to deliver a jolt to the Toyota PHEV Prius and GM’s Volt. With a fuel efficiency of up to more than 100 MPGe, it takes a direct nab at the competition.

The regular Fusion boosts the fuel economy numbers for 2013 with the use of its EcoBoost, downsizing the V6 to a 4 cylinder direct injection, turbo-compressed one. The results are impressive with 47-mpg for the hybrid version and over 100 MPGe for the PHEV. The 1.6L version will deliver about 179 hp with a projected 26 mpg city driving and 37 mpg on highways. The beefier 2.0L version will put out a whooping 237 hp with around 23 mpg for city driving and 33 on highways. Not bad for a mid-size sedan. If EcoBoost is above your budget, a 2.5L normally aspirated four-cylinder engine will deliver plenty with 170 hp, giving you 22 mpg in the city and 33 mpg on highways. There is an optional stop-and-start feature on all Fusions, which should further reduce your fuel consumption by 3.5%.

The new Ford Fusion Hybrid uses the lithium-ion battery pack which boosts fuel efficiency to about 47 mpg city driving and 44 on highways, 22% better than last year’s model. Whereas last year’s Fusion could drive up to 47 mph on electricity alone, this year’s version will reach 62 with a downsized engine, 2.5 to 2L.

The front and rear suspension have been revised and a new tuning of the electrically assisted steering will deliver an even better driving experience. The Fusions pack Ford’s much touted Sync system, which allows for voice-activated calling and more. They will come with Blind Spot Information System and Lane Keeping Assist to help those in need of extra special awareness. Since the Ford Fusion is designed for a global expansion, it’s overall body strength increased by 10%.

How Much? There is no final price announced yet but you can expect a mild increase for an overall better performance.

Clearly Ford is still hard at work to keep its juggernaut momentum going. The 2013 Fusions up the ante with better performance and will keep the company well ahead of its local competition. Speaking of which, when are we going to see some real competition from the GM and Chrysler? We can only hope FIAT will infuse its Italian flair and frugal multi-air engine technology to Chrysler and that GM brings us more efficient cars it has elsewhere. In the meantime, the Ford Fusion was named Best In Show at the North American Auto Show in Detroit and the 2013 will match the performance with a more pleasing aesthetics.

Adam Yamada-Hanff wrote on January 13, 2012 - 2:15pm Permalink
Ford has done a great job with updating it's lineup so their cars are fresh and current. Chrysler and GM still have catching up to do.