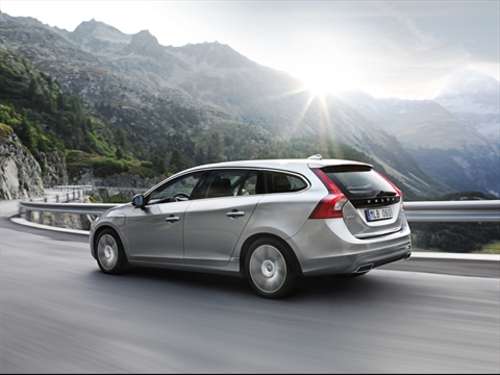 Doug Speck, Senior Vice President, Marketing, Sales and Customer Service at Volvo Car Corporation, promising that "2013 will be one of the most intense years in the company's history," in which the company will be "renewing more or less our whole model range in less than two years," said about the V60 Plug-in Hybrid "None of our competitors can offer customers an equally ingenious car. Its uncompromising attitude to green motoring elevates hybrid technology to an entirely new level."

Volvo describes the V60 Plug-in Hybrid as "three cars in one" which puts an end to the supposed compromise in choosing to drive a hybrid. The three cars in one idea is implemented by three mode buttons on the dashboard: Pure, Hybrid and Power. In Pure mode the car is powered solely by its electric motor as much as possible. In Hybrid mode, the default upon starting the car, the diesel engine and electric motor cooperate to balance between driving pleasure and fuel efficiency. In Power mode the system is configured to deliver the most power possible.

In Pure electric mode the V60 Plug-in Hybrid has a 30 miles (or so) electric driving range. Recharging time is about 3 1/2 hours, for a full recharge. In Hybrid mode it has a very low emissions footprint and a total driving range over 600 miles. In Power mode, the diesel engine and electric motor have a total power output of 215+70 horsepower and maximum torque of 440+200Nm, and the electric motor is used to provide fast acceleration with a 0-60 time of 6.2 seconds.

The interior features leather seats, leather steering wheel, electrically adjustable driver's seat, and integration with bluetooth cellphones. Also standard is a High Performance Multimedia DVD audio system with 4x40 W amplifier, eight loudspeakers and seven-inch screen. The V60 Plug-in Hybrid is the first Volvo to replace traditional analog information gauges with a fully digital Driver Information Monitor (DIM). The dashboard, instead of the typical needles, is a one-piece LED display screen that offers a large number of display options. There is also a smart phone app available giving drivers access to a number of smart functions such as air conditioning, pre-cooling and after-cooling, and a reminder to connect the charge cable if this has not been done by a predetermined time.

The V60 Plug-in Hybrid is Volvo's first vehicle to bear the D6 badge, meaning it's horsepower is firmly in the range of the gasoline powered T6 range. Connected to the front wheels is a five-cylinder 2.4-litre turbodiesel producing 215 hp and maximum torque is 440 Nm. Connected to the rear wheels is an electric motor producing 70 horsepower, and the lithium-ion battery pack holds 11.2 kWh of electricity, and sits under the floor of the passenger compartment. The battery pack has a water cooling system driven by the climate-control system.

The car has an all-wheel-drive system (AWD) implemented electronically using the front-axle and rear-axle drive-train. It has been designed to provide better road grip when starting, or when driving on slippery roads. Because the electric motor has limited power relative to the diesel engine, AWD mode is active to 75 miles/hr. AWD mode is driver selectable, and is more economical than full time AWD. When AWD mode is active, the diesel engine operates continuously, with part of its purpose to generate electricity to maintain battery pack state of charge.

When Volvo says the first year of production is already sold out, they are referring to a 1,000 unit run for the 2013 model year, that is available in a "Pure Limited" edition with Electric Silver livery with aero-designed 17-inch wheels and other distinctive stylistic flourishes. For the 2014 model year the V60 Plug-in Hybrid production will increase to 5,000 units.

"Our plug-in hybrid has received considerable attention since it was unveiled at the Geneva Motor Show in 2011. Now we're taking the next step by presenting the production model, which is graced with a distinctive profile featuring a spectacular silver colour, an exclusive interior and generous standard equipment," says Stefan Jacoby, President and CEO of Volvo Car Corporation.