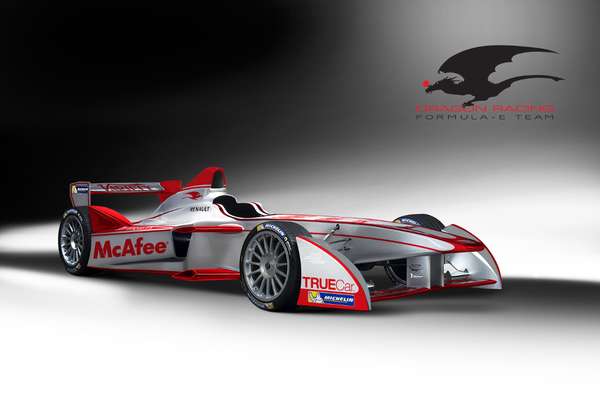 The four teams announced so far are - Dragon Racing, Andretti Autosport, Drayson Racing and China Racing. The Formula E series is to have 10 teams each with two drivers. The FIA's World Motor Sport Council will consider for approval the final roster of 10 teams.

The Formula E series features Formula One style racing cars that are electric. Races will be held in city centers of leading cities around the world like London, Los Angeles, Beijing, and racing around iconic landmarks.

The electric race cars, designed by a consortium of companies including Renault and McLaren, will be hitting speeds up to 140 miles/hr. Each car has a 20-25 minute racing time. The plan is to have two cars per driver and for the driver to swap cars halfway through the race.

“It’s an honour for Dragon Racing to have been selected as one of the founding teams in Formula E,” said Jay Penske, Owner and President of Dragon Racing. “Formula E symbolizes a vision for the future of motorsports and the automotive industry, while directly appealing to a new generation of global race fans. Formula E offers a tremendous opportunity for our many technology and media partners, and we look forward to its inevitable growth and ascendancy over the next decade.”

Dragon Racing is owned by media and publishing entrepreneur Jay Penske. In May 2007, they debuted at the Indianapolis 500 finishing an impressive fifth with Ryan Briscoe. In 2009 they completed their first full season with IndyCar claiming Rookie of the Year with Raphael Matos. They currently race two cars in IndyCar with drivers Sebastian Saavedra and four-time Champ Car World Series champion Sébastien Bourdais.

Alejandro Agag, CEO of Formula E Holdings, said: “We’re extremely happy to welcome Dragon Racing to the FIA Formula E Championship and are convinced that Jay Penske and the team will be a major contribution to our grid. Today’s announcement also brings an LA based team to the Championship. That has special significance as California has become the ‘land of electric cars’, an example that we want to spread to the rest of the world. With Dragon Racing lining up alongside fellow IndyCar giants Andretti Autosport, what’s apparent is the continued interest from the States Formula E is receiving from not only teams but also cities, with races taking place in Los Angeles and Miami. We still have more teams to announce over the coming weeks, with the full grid to be made public by the end of November.”

In August Racing champion Gil de Ferran was named Formula E Ambassador, and Fox Sports was named as the broadcast network partner. In July the series announced they'd completed the 2014-15 calendar with deals for 10 host cities, and made arrangements for a consortium of companies to build the race cars.