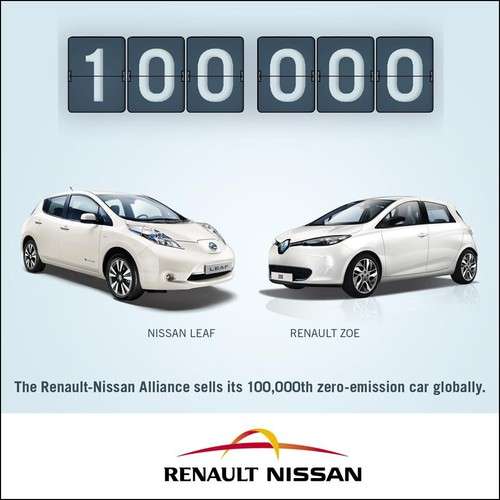 That electric cars are starting to become normal in society is underscored by the Renault-Nissan alliance reaching the milestone of 100,000 total sales of electric cars since late 2010.
Advertisement

Are electric cars a niche item or are they becoming mainstream? The Renault-Nissan alliance today released a number indicating that electric cars have reached a threshold towards becoming mainstream. The two Alliance has, together, sold over 100,000 electric vehicles, worldwide, since the first Nissan Leaf was sold in December 2010. While that's a tiny percentage of overall car sales, it represents a huge growth rate in electric car sales.

The Nissan Leaf remains the best selling electric car in the world, by the reckoning of the alliance. Total sales, worldwide, are over 71,000. The split of sales by geographic region are, 31,000 in the United States, 28,000 in Japan, and 12,000 in Europe. In the United States, the LEAF is among the top 10 vehicles sold in San Francisco, Seattle and Honolulu.

Thanks to significant incentives in Norway for electric vehicles in general, where electric cars are exempt from value added tax (VAT) and road tolls, and they have access to bus lanes and free parking, the Leaf is Nissan's best-selling model. Over 4,600 people have bought Leaf's in Norway since 2011.

The Fluence Z.E. was the car sold by Better Place for use in battery swapping stations.

The ZOE has a low base MSRP of around 20,000 euros, thanks in part to separating the battery pack purchase from the car purchase, and buyers lease the battery pack rather than purchase it outright. The ZOE went on sale in March and has already sold 5,000 units.

In the U.S. alone millions of cars are sold a year leading many to dismiss electric car sales as a paltry blip. Prior to the December 2010 launch of the Nissan Leaf, worldwide sales of electric cars was extremely tiny. The Tesla Roadster sold approximately 2500 units total, the Mitsubishi i-MiEV sold a few thousand units, and there were various other electric cars sold at small volumes. The Leaf was the first mass-market electric car to go on sale, and it has been joined by a few other cars from other manufacturers, most notably the Tesla Model S, which is selling at a rate above 20,000 units a year.

Between all the manufacturers of all electric cars, worldwide sales is many times higher than it was in 2010 or earlier.