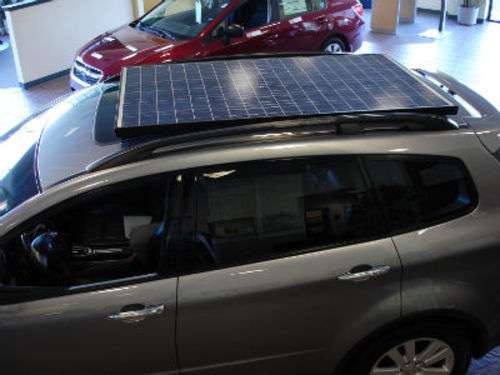 One of the dreams in electric cars is tying a clean electric car with cleanly produced electricity such as from a solar panel. Some people take the idea and plant solar panels on the roof of their house but others add them to the vehicle attempting to directly drive the vehicle using solar panels. A solar powered vehicle could only drive during the daytime, so would require a battery pack to store energy for night-time driving, but that didn't stop a Subaru dealership, Planet Subaru in Hanover MA, from building a prototype solar electric SUV using a Subaru Tribeca the dealership had converted to electric drive. The dealership had previously put solar panels on the roof of the dealership building, becoming the only Subaru show-room in the world to be fully solar powered. In dealings with various solar panel manufacturers the dealership found a brand of panels that, through various techniques, supposedly had "the solar collecting power of approximately five hundred conventional solar panels."

One of the companies Planet Subaru found had developed solar panels with multiple thin layers, each absorbing a different light frequency. That, and the tiny fresnel lenses to collect more solar energy, is what makes the panels so efficient at collecting sunlight and converting it into electricity.

The Subaru Tribeca required a year of work, on the side, to engineer the conversion to electric drive. This is typical of an electric conversion, because of all the fiddly bits that have to be installed correctly for highway speed driving. The announcement from the dealership did not give specifics of the electric conversion, other than use of a brushless DC motor. A picture shows a layer of lead acid batteries in the rear cargo area indicating an inability to locate the batteries out of the way. It's unfortunate that many electric conversions end up sacrificing cargo area to hold the battery pack.

As a solar powered electric car, it doesn't run too well when the sun isn't shining. So the car can be driven at night, the team is attempting to use a Di-Lithium Crystal Transductor that is supposed to serve as a capacitor. However they are finding Di-Lithium to be really unstable, and are struggling to tame the power fluctuations.

If incredulity has not begun to sink in, let me talk with you about this bridge in Brooklyn I have for sale. It may help to explain the date on the press release disclosing this wonderful news was, well, April 1, 2012.

Yes, it's that time of year, and fortunately it only lasts a day or two. However there is also a lesson here, teaching us a bit about detecting fantastical claims. This skill is especially important because 2012 is a season of crazy politics, and the crazy politicians are going overboard with nutty ideas about national energy policy and transportation policy that, if followed, would send the U.S. into a deeper oil dependency, and deep troubles in a few years.

The solar powered car is an idea that comes around frequently, and many have attempted to build them. There are solar powered car races every year but those are cars only in the loosest sense of the world. They all sit extremely low to the ground, the operator has to be very skinny and willing to sit in cramped quarters for a full day of racing. There's no back seat for the kids, no infotainment system, and there are no cupholders. In most cases solar panels are non-aerodynamic rectangles that don't fit well with the curves of a normal car, meaning that adding solar panels to a car results in destroying the aerodynamics, perhaps inducing more energy loss than would be gained from the solar panels. But the most important factoid about solar panels is the relatively low power output per square foot of surface. In optimum conditions a typical 4 foot by 8 foot solar panel produces only a few hundred watts, which is nowhere near the tens of kilowatts required to propel a typical electric car down the highway.

The Fisker Karma, for example, has solar panels embedded in the roof. Does this mean the Karma offers solar powered driving? Far from it, those solar panels primarily power the stuff in the passenger cabin, such as the heating and cooling systems. According to a sales person at a Fisker dealership, the solar panels can add energy to the battery pack, but provide less than 200 miles per year of added driving range. Because the solar panels are embedded in a roof that's shaped in a pleasing aerodynamic curve rather than the rectangle positioned at the optimum angle to catch the maximum solar energy, the energy that can be captured by the Fisker Karma is a fraction of the potential.

Fisker, to their credit, is honest about the performance of the solar panels on the Karma. The history of alternatively powered cars does contain more than a few snake oil salesmen with sham claims of technological breakthroughs that are impossible under the currently understood laws of physics. An example are those claiming to have a system for using water to power a car. Water itself is not a fuel, but conceivably the water could be split into hydrogen and oxygen, and hydrogen is a fuel. That conversion requires more energy than one gets when recombining the hydrogen back into water, meaning that while the water to hydrogen to water conversion cycle is extremely clean, it requires more energy than is produced, meaning that no vehicle could run very long on water without any added electricity.

It's important to remember to use ones power of reasoning when a claimed breakthrough or goal looks outrageous. Sometimes there are true breakthroughs that utterly change the course of technological development, and in other cases it's a hoax or a simple joke. An example are the politicians this year making fantastical claims about oil supplies and the power of a President to control the price of gasoline. First, Presidents have little ability to control the price of oil. As former Treasury Secretary Robert Reich recently pointed out, oil prices are being manipulated by Wall Street investors who are betting on wars and instability in the Middle East. Can a President control this sort of market manipulation? Decades of erosion of regulatory powers have made it impossible for the government to adequately regulate the marketplace for anything, including the price of oil.

John Goreham wrote on March 30, 2012 - 4:05pm Permalink
I was part of a team that built one of those solar race cars in 1990. I learned a lot and it makes it hard not to be very skeptical about PV solar and electric cars. The general lesson from my time working in the engineering field is that solar panels are small black boxes into which go 1.2 units of energy and from which 1.0 units emerge over their lifetime. Unless they break sooner than planned.