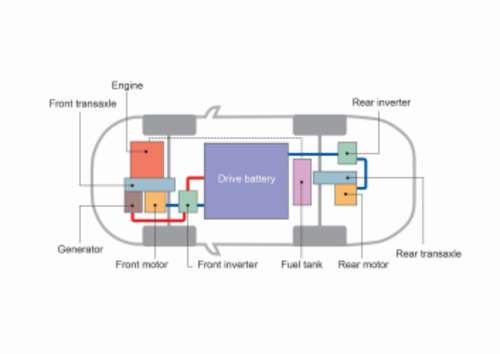 Mitsubishi has revealed details of its Outlander PHEV ahead of its debut at the Paris Auto Show, making it the first plug-in hybrid SUV offering the advantages of driving electric, coupled with the range of a gasoline vehicle, and the performance of a 4 wheel drive SUV.
Advertisement

While several companies have made hybrid SUV's, the Outlander PHEV will be the first of these to support plugging in to recharge the battery pack. It offers the best of three worlds, the cleanliness of an electric drive train, the cruising range of gasoline powered vehicles, and the on- and off-road performance of an SUV.

The Outlander PHEV targets mid-size category and above, a segment where total cruising range is very important. Small electric cars like Mitsubishi's i-MiEV can be thought of as a "city car" where the limited driving range is not a hindrance. However, SUV's routinely take long trips or haul prodigious amounts of people or cargo, and a limited driving range would clearly be a hindrance. While Tesla Motors plans to introduce an all electric SUV with a 300ish mile driving range, the price for the Outlander PHEV should be far more affordable than Tesla's Model X.

While the electric drive train is derived from that in the Mitsubishi i-MiEV, it couples that system with the very latest ICE environmental technologies, including Mitsubishi's MIVEC (Mitsubishi Innovative Valve timing Electronic Control system) variable valve timing system.

It carries a 12 kilowatt-hour battery pack which Mitsubishi says will be certified for a 55 km (JC08 mode) electric driving range. Fuel efficiency is 61 km/liter, the PHEV offers a total cruising range of 880 kilometers. All these numbers are based on Japans JC08 mode, and it's well understood that Japans certifications result in much higher range and efficiency numbers than US EPA certifications.