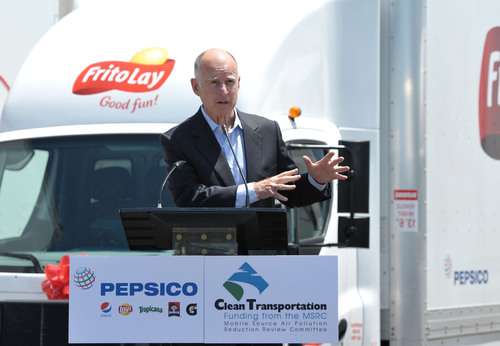 Frito Lay is building the largest electric delivery truck fleet in the U.S., eventually saving 500,000 gallons of fuel a year, and saving lots of money on fuel it doesn't have to buy.
Advertisement

By the end of 2012, Frito Lay will have more than 275 electric trucks deployed in the U.S. making their the largest commercial fleet of all-electric delivery trucks in the country.

For the trucks already in use in California, the company claims to have saved 50,000 gallons of fuel and 1 million pounds of greenhouse gases. In May this year Frito-Lay reached a milestone of one million all-electric miles driven.

When fully deployed the 105 all-electric trucks in Frito Lay's fleet are expected to save 200,000 gallons of fuel and nearly 4.5 million pounds of greenhouse gases annually. When fully deployed the company expects to save over 500,000 gallons of fuel annually through using electric delivery trucks. The trucks will be operated from distribution centers in Alameda, City of Industry, La Mirada, Manteca, San Diego, San Jose and Torrance. The company has a goal to reduce total fuel consumption and greenhouse gas emissions by 50 percent by 2020, compared to 2007 baseline. PepsiCo (the parent of Frito Lay) overall has introduced 267 hybrid electric trucks and 67 compressed natural gas (CNG) tractors; 176 hybrid electric vehicles and14 CNG tractors are scheduled to operate in California.

"With the continued introduction of electric vehicles into our fleet, Frito-Lay continues to assert its commitment to environmental sustainability," said Leslie Starr Keating, senior vice president, supply chain for Frito-Lay North America. "Nearly 20 percent of our medium-heavy duty delivery trucks in the state of California are slated to be transitioned to all-electric vehicles. We have seen the accelerated growth and acquisition of this innovative technology because of the support from California. It's these private and public partnerships that create the momentum that alternative fuel vehicles need to become even more competitive."

Corporate fleets are the ones best positioned to reap the financial benefits of electric vehicles. Electricity as a fuel is cheaper than gasoline or diesel, with the biggest benefit coming to those who drive the most. Delivery trucks often drive on fixed routes and the 80 mile driving range of the trucks chosen by Frito Lay are sufficient for those routes. Electric trucks with sufficient range for their delivery routes, are run in a "return to base" model where the truck returns every night to the depot for recharging. At cheap night-time electricity rates. In addition to saving money, and eliminating tailpipe greenhouse gas emissions, the virtually silent operation eliminates noise pollution.

In California, Frito-Lay has received a grant from the Mobile Source Air Pollution Reduction Review Committee (MSRC), specifically in the South Coast Air Quality Management District, and other funding from the California Energy Commission and the Hybrid Truck Bus Voucher Incentive Project from California Air Resources Board, administered by CalStart.

"These electric vehicles prove we possess the capacity, technology and imagination to make change happen," said California Governor Edmund G. Brown Jr. "That's the significance of today - efficiency, elegance and renewable energy coming together for a private company, in partnership with state and federal government. It's a great day, and a great milestone - and is just the beginning of a lot of steps forward."