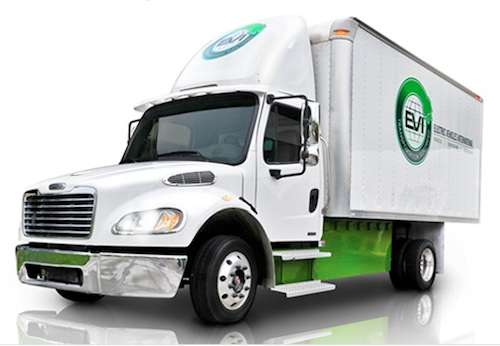 Electric Vehicles International (EVI), a Stockton CA based electric truck manufacturer, announced an initiative meant to piggyback on the Gov. Jerry Brown's recent executive order that included goals for the deployment of electric trucks and cars across California. EVI's plan is to "deploy" 500 electric trucks with fleet customers over the next two years.

The initiative, if successful, is expected to displace 2 million miles of toxic diesel emissions per year, and create truck manufacturing jobs in the Central Valley.

"Governor Brown's EV Executive Order is the type of leadership that drove our electric vehicle manufacturing operation to California from Mexico. We are proud to do our part to create jobs and clean the air in California," said Ricky Hanna, President and CEO of EVI.

"We are thrilled that national fleet operators are choosing California to lead large-scale deployments of commercial electric vehicles. UPS' deployment of 100 EVI zero emission vehicles this year and EVI's 500-vehicle initiative over the next two years will greatly help improve public health in California by reducing air pollution. This proves that ultra-clean delivery vehicles are ready now for everyday use in our communities," said Mary D. Nichols, Chairman of the California Air Resources Board.

The collaboration with UPS extends as far back as September 2010 when the two companies announced a 90 day pilot project using an all electric walk-in delivery van. That van used a truck from Freightliner Custom Chassis Corp, equipped with a Utilimaster body, and a 99 kilowatt-hour battery pack from Valence Technologies. UPS used data collected during the pilot project to calculate return on investment, and showed the 100 trucks being deployed with UPS will eliminate 126,000 gallons of fuel annually, saving on fuel costs as well as other benefits from reduced CO2 emissions and noise pollution.

On March 20, EVI and Frito Lay announced a pilot project testing an EVI Medium Duty (EVI-MD) on a delivery route in Alamedia California. Upon completing the test program, Frito Lay has committed to buying five additional trucks. The EVI-MD has a 90 mile range, from the 99 kilowatt-hour battery pack, and a top speed of 65 miles/hr. “EVI is excited to work with Frito-Lay on expanding their fleet of electric vehicles,” said Frank Jenkins, Vice President of Sales and Marketing for EVI. “Frito-Lay is a leader in the adoption of zero emission delivery vehicles and is the ideal customer and fleet application for our medium duty, return-to-base trucks.”

Earlier in March the company announced it had been awarded a U.S. General Services Administration (GSA) Schedule, a requirement for federal agencies and military forces to purchase the company’s vehicles.

"EVI is proud to build EV trucks in California that significantly reduce fuel and maintenance costs for fleet operators while meeting their day-to-day demands, as well as offering a much greater reduction in carbon footprint and fuel usage than electric/hybrid cars and light duty trucks," said Frank Jenkins, Vice President of Marketing and Sales of EVI. "Our plan is to be a major contributor to the successful accomplishment of California's zero emission goals and to support jobs here in California."