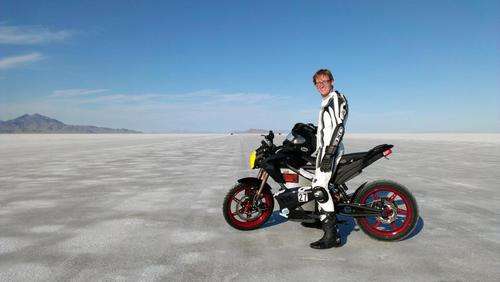 Miller was riding to break a record set in August by Kevin Clemens, with Clemens' encouragement. That record, in the World Unfaired Electric Motorcycle under 150 kilograms class, was set at 78.4 miles/hr during the BUB Motorcycle Speed Trials. Higher speeds have been attained with electric motorcycles in other, heavier, classes. The highest record, at 216 miles/hr, was achieved by Lightning Motorcycles in August 2011, at the Bonneville Speed Week. A little later that month a set of speed records just shy of 200 miles/hr were set by Chip Yates during the 2011 BUB Motorcycle Speed Trials. Both were in a heavier weight class than are the bikes Miller and Clemens were riding, whose bikes are in the under 150kg class.

Almost immediately upon arriving Miller broke Clemens record, just during initial testing, with an average speed in the upper 90's. However there were several changes required for compliance with AMA and FIM regulations. For example the AMA requires steering dampers which are not stock on the Zero S, and members of the Al Lambs Honda team pitched in to fabricate steering dampers for Miller's bike. Other changes included a chain guard, and an automatic shutoff lanyard. At one time there were six people all working on different parts of his bike and everybody at the event was very interested in the electric bike.

After a series of runs between Sunday and Tuesday, Miller ended up with a 101.652 miles/hr land speed record, certified by both AMA (national) and FIM (world), for modified production motorcycles under 150 kilograms, averaged over a 1 mile distance. The highest speed shown on the timing slip is 103.381 miles/hr.

Again, with an almost stock Zero S ZF6 that just a couple days before Miller had ridden on his daily commute.

One of his goals was to see what he could do in electric motorcycle racing, starting with a production electric motorcycle and a few modifications. Before arriving at Bonneville Miller made a few small modifications with the assistance of Hollywood Electrics and DigiNow. These included tweaks to the controller to modify torque and maximum RPM settings, as well as changing out the rear sprocket for a different gear ratio. Nearly any Zero S owner could make these changes themselves.

The 2012 Zero S ZF6 is a production electric motorcycle, is sold by Zero Motorcycle dealers around the world, and manufactured in the SF Bay Area. It is rated for an 88 miles/hr top speed, or 75 miles/hr sustained. Riding range is 76 miles city, 43 miles highway. The electric motorcycle field is evolving rapidly enough that this level of performance was available only on experimental bikes just two years ago. Now it's being manufactured by the hundreds. Any motorcycle rider could buy one today, have a competent commute bike, or make a few modifications, and go racing.

Zero Motorcycles themselves had a similar idea, supplying four Zero S ZF9's in the 2012 TTXGP series for the eSuperStock award. While they weren't making headline grabbing speeds, they put in exciting credible racing performance nearly equal to 250cc gas bikes.

Miller's next step is to enter a 250cc gas bike race this weekend, with the same bike, and to keep taking the steps in front of him. He's looking forward to the salt flats next year and bumping the speed up a few notches. He's also looking forward to competition from Brammo Empulse owners who may be able to do as he's done, make a few modifications and go racing.

Kelly R. Olsen wrote on September 21, 2012 - 5:16pm Permalink
This is very exciting and I'm delighted for Brandon and his success. It will do a lot to further interest in electric bikes and electric vehicles in general.
Anonymous wrote on September 21, 2012 - 8:01pm Permalink
I don't think the Brammo Empulse weighs under 150 kg, so no direct competition, but I'm not sure the Empulse will be in the same weight class as bikes like the Lightning.
Ronald Martens wrote on October 29, 2012 - 7:55pm Permalink
Thats great and I learned something about the zero which I hope will be in the 2013 range like damping and chain guard. The difference between the brammo impulse is they have gear selection. Unlike the inertia which is a single speed. Interesting the the power of the new zero is the same as the 2012 Brammo impulse. Of coarse can't seem to get hold of a mission r or for that matter a munch. I'm trying to get the zero to Western Australia. The electric cowboy I like that name and well done for your enthusiasm you must be a good rider. The mission not even latest model is a single speed and awesome.
David Herron wrote on October 30, 2012 - 4:49pm Permalink
A couple years ago Mission Motors decided to back away from plans to manufacture electric motorcycles. The company still builds them, but solely for testing (so they say) the components they sell to OEM's. They say they're too busy designing and building components to get into the motorcycle market. I talked with Muench guys at Daytona at the TTXGP World Championship. They say they're interested in making bikes for sale, and are willing to sell some bikes, but it sounded like they're not in a position for large scale manufacture. It's also possible to contact Lightning Motorcycles for bikes, as they're willing to build and sell duplicates of their race bike. The race bikes I mentioned, including the Empulse RR by Brammo, are light years more powerful than the Zero S or Empulse R.