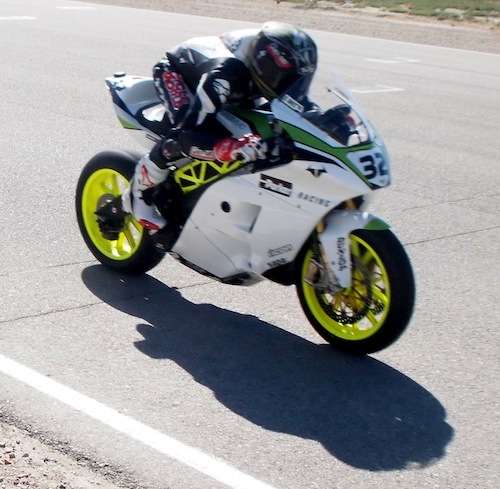 Steve Atlas and Brammo won the 2012 TTXGP North America Championship this weekend at the season finale at the Miller Motorsports Park outside Salt Lake City Utah. While Steve Atlas won the series Championship, team-mate Eric Bostrom won todays race by a wide margin. It was an exciting close to the season, with Brammo, Virginia Tech and Zero Motorcycles racing.

The weekend had seen scattered thunderstorms on Saturday, with mild (for the desert) temperatures in the 80's, and clear conditions today. In yesterday's qualifying round Steve Atlas and Eric Bostrom both had best lap times right at 1:40, with Bostrom edging out Atlas by 2 hundredths of a second to take the pole position. Matt Kent riding for the Virgina Tech team had a few problems with the bike but qualified at 3rd position in the grid.

In the race, Steve Atlas took an early lead which lasted for about a half a lap. Bostrom easily overtook him, and maintained an ever-growing lead until the finish. He finished nearly 17 seconds ahead of Atlas and set a track record for electric motorcycles of 1:38.480 (on the east track). Atlas' best lap time of 1:39.937 was no slouch, but was no match for Bostrom, especially considering the two were riding essentially identical Brammo Empulse RR electric motorcycles.

The race this year was held on the east track at Miller Motorsports, whereas when the TTXGP came to Miller in 2011 the race was held on the west track. This means todays 1:38.480 record lap time does not change Shane Turpins record lap time from the 2011 race. The Miller Motorsports facility has a track that can be split in two, for concurrent races on the east and west tracks, or run as one large track. The two tracks are different and track records on one do not apply to track records on the other.

Matt Kent on the Virginia Tech bike was racing on his own, between the faster Brammo bikes and the slower bikes from Zero Motorcycles. The team worked out the difficulties from yesterday, and the bike ran well with Kent achieving a best lap time of 1:53.555.

The Zero Motorcycles eSuperStock group split into two pairs. The first pair was Kenyon Kluge and Andrew Cowell, duking it out for the first half of the race until Kluge was able to pull ahead and stay in the lead to win 4th place overall, about 14 seconds ahead of Cowell. Taking up the rear was Kenny Cummings and Anthony Burrows who stayed neck and neck for the whole race until even the last couple hundred yards. Burrows seemed ready to make a charge to get ahead of Cummings, but Cummings was weaving back and forth to block Burrows' advance. Cummings finished about 0.15 seconds ahead of Burrows.

The race consisted of three groups, which are essentially race classes, racing together. The four bikes from Zero were also racing for the eSuperStock award, with Kenyon Kluge winning that award. The eSuperStock award applies only to production electric motorcycles with sales volume over 25, and it is only the Zero S or DS which qualifies. The Virginia Tech team was also racing for the TTX75 award, which is defined as motorcycles carrying a 7.5 kilowatt-hour (or smaller) battery pack. Ely Schless had been racing for the TTX75 award, but the Virginia Tech team won that award.

The Brammo bikes, as well as those from Lightning Motorcycles and MotoCzysz, are what is essentially the "open class" in the TTXGP. All three of these teams have the top electric motorcycles currently in competition, with two of the European teams, Muench Racing and Zongshen, close behind. Either Lightning or MotoCzysz could have raced and given Atlas and Bostrom some competition, and the results may well have been different. We don't know what that race would have been because that's not the race which was run today.

This weekend also saw the finale of the TTXGP Australia series, with Team Catavolt the championship after a close race.

Next weekend is the finale of the European series, at the famed 24 Hours of Le Mans race. It is another joint championship race bringing together FIM's e-Power and the TTXGP Europe teams. The e-Power/TTXGP 2012 World Championship is scheduled for late October at the Daytona Speedway.