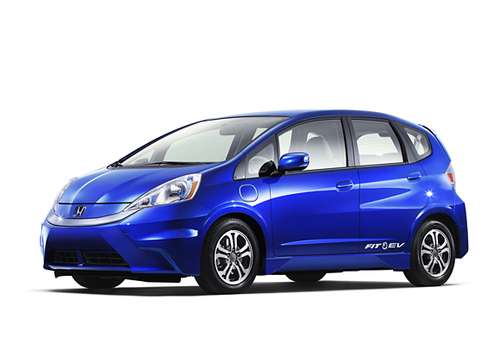 Coda, Honda and Tesla duking it out for longest electric car driving range

Coda Automotive and Honda trade press releases over electric car driving range, while Tesla Motors is preparing to start shipping the Model S to customers with a range about 3 times that of either the Coda or Honda Fit EV.
Advertisement

Last week Honda shared news that the Honda Fit EV had been awarded the best fuel efficiency of any car, at 118 MPGe, and that its EPA rated 82 mile driving range bests the other electric cars. While congratulations are due to Honda for building a highly efficient car, Coda Automotive today posted a blog post reminding us the EPA rating on their all electric car beats the Honda Fit EV driving range. No word from Tesla Motors whether they'll bother to comment about electric car driving range, given that the Tesla Model S has a 300+ miles range.

What's telling is which competitors an automaker names when comparing features on their car to other cars from other manufacturers. For example, when Honda discussed its fuel efficiency and driving range achievements, the company named the Ford Focus Electric, Nisan Leaf and Mitsubishi i-MiEV. Not named was the Coda electric car, nor were plug-in hybrids named like the Chevy Volt or Prius Plug-In. Likewise when Coda followed suit in discussing their efficiency and range achievements, the Ford Focus Electric, Honda Fit EV, Nisan Leaf and Mitsubishi i-MiEV were all mentioned, but the Tesla Model S was not.

The Honda Fit EV, which is due for first customer deliveries this summer, will be available only under a $389/month lease, and then only to customers in California. It has a 20 kilowatt-hour battery pack, and due to a highly efficient drive train that consumes only 29 kilowatt-hours per 100 miles, the car offers an 82 mile EPA rated driving range, and 132/105/118 city/highway/combined miles/gallon equivalent (MPGe).

As noted, this comparison leaves out the Coda electric car. By its EPA ratings, the Coda consumes 46 kilowatt-hours per 100 miles of driving, and due to its 31 kilowatt-hour battery pack, the Coda electric car has an 88 mile EPA rated driving range, and 77/68/73 city/highway/combined miles/gallon equivalent (MPGe). While the Coda does manage to turn in a longer driving range, it's burdened by inefficiency causing it to consume more kilowatt-hours per mile than the other electric cars. Where the Honda Fit EV has a yearly fuel cost of just $500, the Coda yearly fuel cost is $850.

That's the story from Coda and Honda, what about the electric car neither mention, the Tesla Model S? Unfortunately the EPA ratings have not been released for that car, but a Tesla Motors blog post last month claimed that by the EPA "2 cycle test" it has a 320 mile driving range, and by the newer "5 cycle test" the Model S driving range is 265 miles. If Tesla were to speak freely they might shout "Take That Coda and Honda!"

But what does this mean for electric car buyers?

On the one hand this niggling over an 88 mile or 82 mile or 78 mile or 73 mile driving range doesn't strike one as a large difference. Yes, the longer driving range would makes the Coda more usable in more scenarios than the other electric cars, but is a few miles here and there that big of a difference? Not when compared to the 300 miles range of the Tesla Model S, right?

On the other hand, the Tesla Model S is priced out of range for most car buyers. The typical person will simply be unable to buy one, and will have to wait for the Gen III Tesla's which are promised to have a more affordable price. But the company has still racked up over 10,000 Model S reservations and over 1,000 Model X reservations, indicating even a pricy car can sell pretty well.

Tesla Motors has a strategy to design no-compromise electric cars that blow up the stereotypes of the limits of electric cars. For the time being that means Tesla's cars are beautiful, but pricey. The other automakers strategy is to focus on affordability, which means skimping on the battery pack, and providing a much shorter electric driving range. Like buying any other car, which electric car to purchase has to be weighed on a number of factors, one of which is driving range. A longer driving range, coupled with higher powered charging, gives more flexibility in when and where an electric car can be driven. While the Coda electric car offers the longest driving range and reasonably powerful 6.6 kilowatt charging, the Tesla Model S has the best driving range and charging speed, if you can afford the price.

Toyota vs Tesla: Which Stock To Buy These Days
For Some Former Daimler Managers Daimler Is Authority, While Tesla Is Like a Startup
END_OF_DOCUMENT_TOKEN_TO_BE_REPLACED