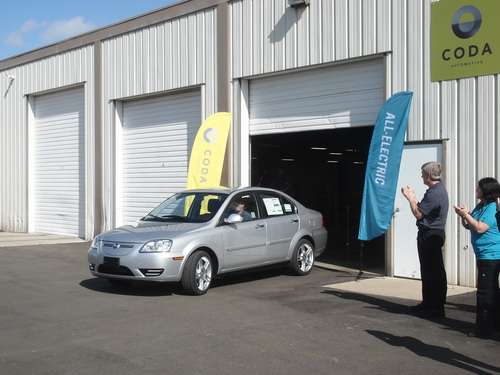 Today, in Benicia CA, the first Coda electric Sedan rolled off the assembly line, and on Friday the company expects to make first customer deliveries with one event in San Diego, another in Los Angeles, and the third in the newly opened dealer show-room in San Jose. It represents, for electric car maker Coda, the end of the beginning of the company's plan to sell electric cars for the mass market.

Coda is a start-up automobile manufacturer, based in Southern California, and focused on designing electric cars. The company began on a quest 5 years (or so) ago with the goal of an electric car in every garage, and ending the age of gasoline. Today's achievement was a small step toward that big goal today by reaching the milestone of beginning actual production, as had been promised recently. The milestone was marked with a ceremony including "Mac" Heller, the Chairman of Coda, and several government representatives from the city of Benicia, Solano County, and the California State Government.

The company's all electric Sedan is the result of a partnership with companies around the world. The drive train comes from UQM, based in Colorado, the battery pack comes from a joint venture the company has in China, and the car body comes from a large Chinese automaker. The partly assembled car is shipped to an assembly facility in Benicia (near San Francisco) operated by AMPORTS where a team of AMPORTS and Coda technicians performs final assembly and testing.

The location is ripe with symbolic meaning. The company's name, Coda, is a musical term representing a transition from one scale to another scale. Coda, the company, hopes their efforts result in a transition from one form of transportation to another. Benicia, the city, is surrounded by oil terminals and oil refineries, making it a curious location to assemble electric cars, except that the Benicia city government prides itself on a long record of sustainability efforts.

Coda chose this location because of key infrastructure elements. Benicia has its own deep water port, and the Port of Oakland is nearby. The Benicia port is used not just by oil tankers, but also automobile deliveries, and there is a significant automobile processing facility nearby. Coda's partner, AMPORTS, has significant experience with processing and customizing cars.

One of the questions surrounding Coda is the breakdown of the country of origin for the components, and just how much of the car is made in China. The EPA label says 12% of the content of the Coda Sedan is American/Canadian, 70% comes from China, 6% comes from Mexico, 4% from Japan, 4% from Thailand, and 2% from Germany.

Those of us who have watched Coda over the years have had another question: Will Coda make it all the way to producing actual cars? And if they make it to that threshold, will the company generate enough sales to become self-sustaining? We now know the answer to the first question, yes they have begun producing cars. The assembly facility appeared to contain 50 cars in various states of assembly. The facility consists of a workshop for car assembly, another building that appeared useful for staging cars, and a cluster of 16 GE WattStation charging stations. As for the second question, that remains to be seen over the next few months.

The EPA sticker contained a little surprise in terms of energy efficiency and range. Coda has long claimed the 31 kilowatt-hour model would deliver 125 miles range, while the 36 kilowatt-hour model would deliver 150 miles range. Instead the EPA sticker says 77 MPGe city, 68 MPGe highway, 73 MPGe combined, and surprisingly an 88 miles range. The EPA range estimate is based on consuming 46 kilowatt-hours for 100 miles, leaving a 31 kilowatt-hour vehicle capable of 88 miles. Coda states that actual range and performance, of course, depends on driver habits and driving conditions. In the UDDS test cycle, Coda claims the 31kWh battery yielded 133.6 miles per charge for city driving conditions.

Deliveries to customers commence at the end of this week through dealerships in Southern California and Silicon Valley: CODA of Silicon Valley, run by Del Grande Dealer Group (DGDG in Northern California; Marvin K. Brown Auto Center in San Diego; and various locations in the Los Angeles region that will be announced soon. For the time being, Coda is only selling cars in California, but the company says "As production increases, additional dealerships in the state and beyond will be announced."

“This is an incredibly exciting day for the CODA family and the EV community,” said Mac Heller, executive chairman, CODA Holdings. “Since day one, we’ve been dedicated to designing an electric car that provides the amenities that the American driver has come to expect, such as range, torque, and value. This car symbolizes our commitment to accelerating the adoption of EVs.”