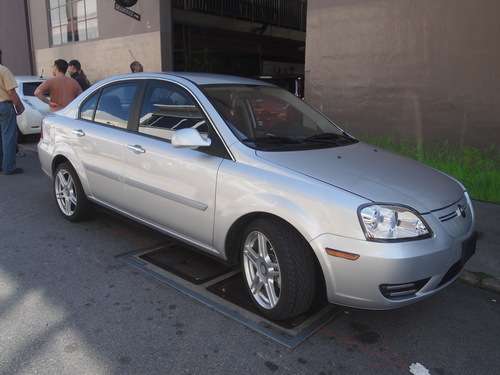 We get a short test drive of the long-awaited all electric car from Coda Automotive that is now being delivered to dealers, with customer deliveries beginning in March.
Advertisement

Coda Automotive is in the final stretch before beginning first customer deliveries of the company's all electric sedan. Over the weekend a Coda team came to the Golden Gate Electric Auto Association (GGEVA) meeting to show the car and offer test drives to a crowd of electric car enthusiasts from all over the SF Bay Area. It was a repeat visit for Coda, from one two years earlier to the same group, and demonstrated just how far Coda's engineers have come in the Coda Sedan's fit and finish and development.

Before offering test drives there was a presentation by Coda's new VP of Sales, Marketing and After-sales, Thomas Hausch. He is yet another industry veteran hired by Coda as the company steps into the role of selling real cars to customers.

The Coda Sedan is partly manufactured by a Chinese automobile manufacturer, and is shipped partially assembled to a facility in Benicia, CA, near San Francisco, for final assembly. It is roughly the size of a standard size sedan, with an outline that is completely compatible with what we think of as a normal car. However, under the hood and under the passenger compartment is an electric drive train with no hint anywhere of the gasoline tank or engine or anything else we might think is a normal car. If cars like this become normal, we will collectively have to rethink what a normal car is, but lets not get ahead of ourselves.

The Sedan comes with a 31 kilowatt-hour battery pack offering a 125 mile range on the UDDS test cycle, for an MSRP of $37,250. It is also available with a 36 kilowatt-hour battery pack, a 150 mile range, and an MSRP of $39,500. In both cases the cost of the Coda Sedan is comparable with the Nissan Leaf, Ford Focus Electric and Chevy Volt, while offering a much longer electric range.

The Sedan has an outstanding value proposition in comparison with other electric cars. It's electric range is the longest of any non-luxury battery electric vehicle. This is further than the comparably priced Nissan Leaf (80-100 miles versus 125+), and a bit shorter than the much more expensive Tesla Model S. It has "best-in-class charging capability", meaning the Coda's on-board charger is 6.6 kilowatts for 25 miles gained per hour of charging, versus the 3.3 kilowatt charger on the Leaf. It has "best in class torque and horsepower", with a 100 kilowatt (134 horsepower) electric drive offering 221 ft-lb's of torque. The 10 year, 100,000 mile battery warranty is also "best in class", as is the 14.1 cubic feet of trunk space. Its price (MSRP) per mile of electric range is a "best in class" $292/mile versus $352/mile for the Nissan Leaf, $392/mile for the Ford Focus Electric, and a whopping $428/mile for the Mitsubishi i-Miev. The various ad

Hausch also presented two tables comparing cost of ownership of the Coda Sedan against the Toyota Prius and Toyota Corolla. In both cases the Coda Sedan was shown to be cheaper to own, but this depends on which way the price of gasoline goes. The cost of ownership model comes from Edmunds, and accounts for the depreciation (the difference between purchase price and residual value after 5 years), taxes and fees, financing costs, fuel costs, insurance, maintenance, and repairs. Because the Coda Sedan is more expensive than either the Prius or Corolla, the depreciation and financing costs are higher, however this is more than made up for in fuel, maintenance and repair costs. With $4/gallon gasoline, according to Coda's figures, the five year ownership cost for a Toyota Prius Liftback IV is $43,268, while for the Coda Sedan it is $40,038. For the Toyota Corolla LE, and $5.50/gallon gasoline, the totals come out to $41,177 for the Corolla and $40,038 for the Coda. But, wait, you're going to say gasoline doesn't cost $5.50/gallon. Yes, the national average gas price is much less than that, today. Some parts of California are currently, today, paying over $5 per gallon for gasoline. Gasoline prices are far more volatile than are electricity prices, and electric car owners are immune to gasoline price shocks such as the one currently unfolding around us. See also Why electric cars are cheaper to drive than gasoline cars.

Enough about all that, what about the car?

First off, the fit and finish are excellent and it looks really nice. The prototype Coda brought two years ago was drab and humdrum by comparison, and clearly Coda's designers have spent the last two years focusing on details. It's a five seater sedan, however reports from those who sat in the rear seat said it was a bit cramped. The drivers seat was comfortable with controls where you expect them. Except, that is, for the gear shifter. Instead of a shift lever to select between Park, Reverse and Drive, one turns a knob. The knob is straight-forward to use, but is different than normal and will require a bit of an accommodation period. Coda's knob makes more sense than the one in the Leaf.

Handling is responsive with no lag between turning the wheel and direction changes. Acceleration is good, however we were driving on city streets giving limited ability to fully test this. The regenerative braking was pleasant and almost good enough for a one foot driving driving style where you accelerate, then let regen slow the car. Regen response starts soft, then as the car slows down the regen braking becomes stronger, almost to the point of completely stopping the car, at which point the regen lets up and in order to actually stop one has to operate the brakes.

Coda has already made first deliveries of the Sedan to dealerships, including the Del Grande Dealership Group (DGDG) which will handle sales in the SF Bay Area. Hausch says the company is on track for first customer deliveries beginning in March 2012.

In short Coda has put together a very good value proposition, a low cost of ownership, excellent all-electric range, while packaging all this in a nicely appointed sedan. The company's main challenge, as a small automotive startup, will be getting the attention of potential buyers who are accustomed to going to the large automakers.

gra wrote on March 6, 2012 - 7:22pm Permalink
I drove it at the meeting. Coda's website has removed all reference to the 36kWh battery, and now appears to only offer the 31kWh battery, making the car useless for my needs. Other than that, the short, flat test drive didn't show any problems, other than the pre-existing lack of a 'B' mode for descending steep hills or an option for L3 charging. Accel was soft at first but picked up (when above 20 mph according to the Coda rep). With the front seat all the way back I had to splay my knees in the back seat (6'0", 34" inseam), but foot room was okay. No spare, and the rear seats fold down but don't provide anything close to a completely flat load floor; I'm guesstimating a 20-30 degree slope. I liked the steering as far as I could test it, and the ride was unobjectionable; no chance to test the handling. No heated seats, steering wheel or (I believe) outside mirrors. Nice, simple 3 round dial HVAC controls. In short, it felt like what it looked like, a Toyota Corolla circa 2000.
David Herron wrote on March 6, 2012 - 7:35pm Permalink
I am scratching my head over what's happened with their battery pack size. Coda issued a press release on Jan 9 describing the 31 kwh pack as an option, and that they'd supply the car with both battery pack sizes. You're right, however, the website today only mentions the 31 kwh pack, and not the 36kwh (other than that press release). If I recall correctly, in the meeting the speaker described the 36 kwh pack in the future tense, as something they plan to offer in the future. I believe Coda wants to have a price advantage over the Ford Focus EV and Nissan Leaf, and chose a smaller pack to get a lower price, etc. But does this mean anything in terms of a technical inability to deliver the slightly larger pack? Unclear.
Anonymous wrote on March 7, 2012 - 6:47pm Permalink
I have been driving a Leaf for months and it is a great car, this Coda is a SUPER car! I had a chance to drive one this weekend in SF and could not believe the way it drove, it was quick, it handled like a Sports Sedan and the seats and visability were excellent. I must say that Coda took its time to get it right with good( range and great fit and finish. I see so much BS on Electric cars and it is wonderful to see someone really come up with a car like this one. There are only a few choices in this segment but for my money I will go CODA!
Anonymous wrote on March 14, 2012 - 3:31pm Permalink
I agree with your assessment about it handling like a sports sedan. I'll enjoy those executive looking leather seats, when my wife picks hers up Friday, as well. The magazine pics don't do the car justice, since it seems to look better in person than the pics. The range is better than all other than the Tesla, but wish they kept the larger battery option.
Nicolas Zart wrote on March 16, 2012 - 5:03pm Permalink
I was impressed with the driving, handling and finish. I didn't think they would make it into a nice looking car, but it's well on its way. The little grill in and outtake here and there have definitely helped it. As far as the battery pack issue, there something they're not telling us. When I last spoke to them, they only talked about their intriguing battery management system that even monitors humidity in the cells and general electronics. My guess is that they felt they could save money by not offering the 36 kWh pack and squeezed a little more of the 31.

Toyota's First EV Will Have a Name of BZ: Toyota BZ
First Videos From Inside The Boring Company's Las Vegas Loop
END_OF_DOCUMENT_TOKEN_TO_BE_REPLACED