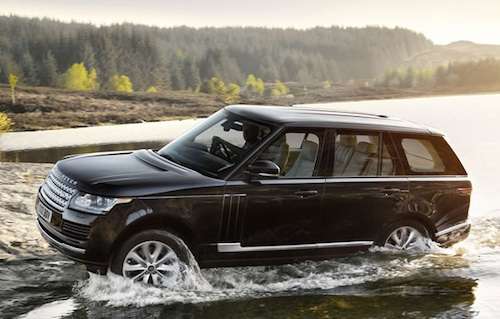 The new 2013 Range Rover, built on an all-new aluminum chassis, has lost almost literally a ton of weight, for massive fuel efficiency gains, and can come in an amazing diesel hybrid model.
Advertisement

Jaguar Land Rover premiered the 2013 Range Rover today in London, showing major leaps forward in weight, efficiency, capability and luxury. Additionally the company confirmed there will be a diesel-electric hybrid version, which will not be coming to the U.S. Yet. The big story is the use of lightweight materials and new manufacturing techniques, resulting in a massive weight reduction, and much higher fuel efficiency. This is not the gas guzzling SUV of yesteryear, while retaining the "drive literally anywhere" mantra of the Range Rover.

The new platform for the 2013 Range Rover uses lightweight all-aluminium construction resulting in a 20% lighter SUV over the previous generation, and a reduction of 22% in fuel consumption and emissions. Implementation required a £370m investment in manufacturing capabilities, including a new aluminium body shop at the company's Solihull plant. The new facilities will be used on not only the Range Rover, but other vehicles bearing Jaguar and Land Rover brands.

Dr. Ralf Speth, Jaguar Land Rover Chief Executive Officer, said: "This outstanding new Range Rover symbolises our commitment to investing in Britain and exporting around the world, delivering class-leading performance, agility, quality and luxury in a model that enjoys iconic status in almost every market. As the UK's leading automotive investor in R&D we are proud of the work that has gone into developing the new technologies and innovations to make the new Range Rover possible. Through a £370m investment in our manufacturing facilities we have been able to build the world's first SUV with lightweight all-aluminium construction, a car that is 20% lighter, with fuel consumption and carbon dioxide emissions reduced by 22%."

The weight reduction helps the company achieve fuel consumption and emissions reduction goals. To get all the way there the company has new engine and drive train choices, including the diesel parallel hybrid. This is based on a new 3.0-liter turbo-diesel V6 engine, using a ZF eight-speed automatic transmission integrated with an electric motor. The 1.7-kWh battery pack sits low in the chassis, tucked inside a boron steel cradle to give the sort of protection required for use cases the Range Rover is designed to accommodate. That is, wading depth is unaffected by the parallel hybrid drive train.

The diesel hybrid drive train is supposed to deliver 333 horsepower, 0-60 miles per hour in under seven seconds and an amazing 45 miles per imperial gallon on the combined European cycle. The company does not advise what the EPA certified fuel efficiency rating would be, but it may be as much as 37 MPG.

A parallel hybrid drive train has both electric motor and fossil fuel, in this case diesel, engine capable of driving the wheels at the same time. The 1.7 kilowatt-hour battery pack is enough for only short distances on electric drive. The system collects regenerative braking power, and can give electric boosts as needed.

Why isn't the U.S. getting the diesel hybrid Range Rover? First might be the general low acceptance American's have for Diesel vehicles. The technical reason is that the current engine has an emissions footprint that does not meet U.S. standards. The engine meets the EU5 standard, but that isn't good enough for the U.S., and Land Rover expects to rectify this with the 2015 Range Rover whose engine will meet the EU6 standard.

The Range Rover has a serious off-road heritage, and a "drive literally anywhere" image to maintain. The 2013 Range Rover maintains that image, with improvements to the air suspension and a next-generation Terrain Response system.

Precise specifications and pricing will be released before the Paris Auto Show.

John Edwards, Land Rover Global Brand Director, said: "Land Rover is a brand with momentum, we have ambitious plans for our future and we are broadening our footprint. Land Rover has seen 12 months of continuous sales increase, up in every region, up 40% in total. Our objective at Land Rover is to be the world's SUV brand of choice for today and tomorrow, a car for all reasons, fit for every purpose."