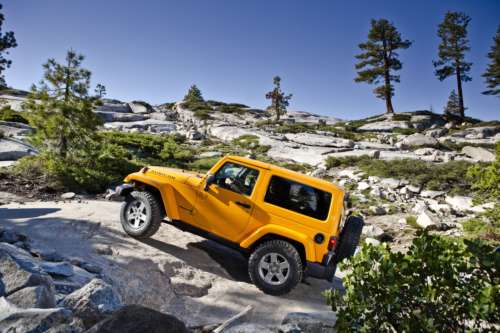 Four Wheeler Magazine, a magazine for off-road enthusiasts, just awarded the 2012 Jeep Wrangler Rubicon its “Four Wheeler of the Year” award, replacing last year’s winner, the Jeep Grand Cherokee. Mind you, Jeep’s pretty well had a lock on the award. Two years ago, the Wrangler Rubicon was dubbed Best 4x4 of the 2000-20009 decade by the same magazine.

It’s not just Four Wheeler that likes the new Jeep however. This is Wrangler’s 8th award in the last few weeks, not bad for a vehicle just introduced in September. Unlike many of the awards handed out by other automotive magazines, the Four Wheeler of the Year win required considerably more than letting the editors play with the vehicle on the race track for a few hours.

"The 2012 Jeep Wrangler Rubicon owned nearly all aspects of off-road testing during our annual 'Four Wheeler of the Year' competition," said Four Wheeler Editor John Cappa. "The grueling 1,000-mile trek put each contending vehicle through its paces in several on- and off-road environments, including high-speed graded roads, jagged rocks, shifting sand dunes, and more. The universal do-all capability of the Jeep Wrangler Rubicon allowed it to outperform the other competing 4x4s, making it our 2012 Four Wheeler of the Year award winner."

Like most annual awards, the vehicles had to be new or substantially changed since the previous year. Most awards don’t then put the contenders through 1,000 miles of varying terrain and elevations, including sand, dirt, gravel, rocks and mud. I’d say any vehicle that came through the testing was worth buying, let alone the vehicle that came first.

Chrysler say the 2012 Jeep Wrangler has improved performance on- and off-road, coupled with more power and better mileage (21 mpg on the highway), thanks to its new 3.6-liter V-6 engine. That seems to be reflected in its sales figures. Wrangler sales have set consecutive monthly sales records for the last six months and are up 29 percent for the year.

"By earning the respected 'Four Wheeler of the Year' award, consumers – and particularly the most die-hard off-road enthusiasts – can be assured that the new 2012 Jeep Wrangler Rubicon has established an even higher level of unmatched capability," said Mike Manley, President and CEO – Jeep Brand, Chrysler Group LLC. "We are delighted the influential editors of 'Four Wheeler' magazine have recognized Wrangler's new level of capability, along with its improved power, torque and fuel efficiency."