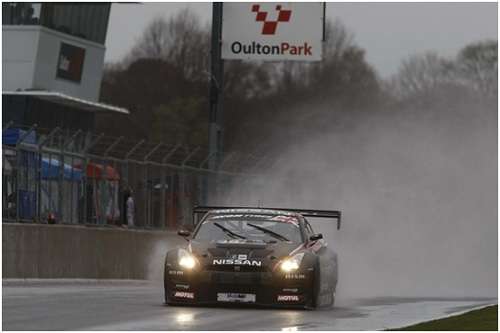 GT Academy driver to race at Monza against Valentino Rossi

Jann Mardenborough is starting his first full season as a professional race car driver this weekend at the temple of speed itself, Monza.
Advertisement

It is important to note that, Mardenborough is Nissan’s most recent Gran Turismo Academy winner. What is the GT Academy? It is a pretty awesome competition that gives potential race car driving hopefuls (couch potatoes) a chance to go from driving in a video game to real life race car driving. The competition is sponsored by Sony, Nissan, and played via PlayStation's Gran Turismo racing game online. There is then a group of sixteen candidates that are sent to race car driving school to refine their skills. The GT Academy has produced several successful racing drivers. Back in January several GT Academy winners secured a podium finish at the 24 Hours of Dubai in a Nissan 370Z.

The 20 year-old British racer will take on the ridiculously difficult and fast Monza track in the new Nissan GT-R Nismo GT3. “The GT-R has very good high speed stability and fantastic brakes so I hope we can go out there and get a great result. We want to do well in this championship so we need to do a good solid job and not take any big risks.” said Mardenborough.

The No.35 GT Academy Team RJN car will be up against a lot of stiff competition. This includes brands such as Audi, Aston Martin, BMW, Dodge, Ferrari, Jaguar, Lamborghini, McLaren, Mercedes and Porsche.

“I’ve never even been to Monza before let alone raced there,” said Jann. However he has driven the track via his PlayStation in the Grand Turismo racing games. “I know which way the corners go and I can’t wait to get out there for real.” he added.

There is quite a surprising entry to the driver pool this year, Valentino Rossi. In case you didn't know Rossi has nine Grand Prix World Championships under his belt. Of course these championships were won on vehicles of the two-wheeled variety, specifically in Moto GP. (Moto GP is considered the Formula 1 of motorcycle racing.) Rossi can be found driving the Ferrari 458s at Monza this year.

This means that Jann Mardenborough, in one year, has gone from entering the GT Academy as a total beginner to racing Valentino Rossi. Keep in mind, Rossi is considered one of the greatest motorcycle racers to every grace the earth. I am sure he knows a thing or to about going fast on two or four wheels.

The important question facing this new professional race car driver, is he scared of the great motorcycle racer Rossi? A lot of drivers or racer would be!

“I don’t know too much about bikes but I know he is the guy to beat on them.” said Jann. “Actually I need to get his autograph for a friend of mine.”