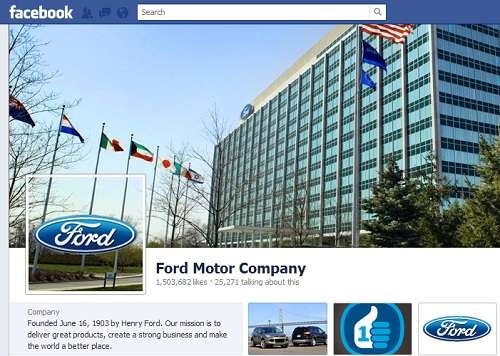 Ford has taken a jab at General Motors over the recent Facebook ad pullout via another very popular social network, Twitter.
Advertisement

For those that are not aware, General Motors announced earlier this week that it was pulling $10 million dollars, out of a $40 million dollar ad campaign budget, out of paid ads for Facebook. This caused a somewhat interesting debate all over the business and automotive world.

It is important to note Facebook is set to have an Initial Public Offering (IPO) of shares tomorrow. The Facebook IPO will make shares of the popular social media network available to any investor. Shares of the company have only been bought by private investors and institutions. The hype surrounding the Facebook IPO has been huge and will be the largest technology IPO on record.

Ford was quick though to voice support for Facebook and the ad platform.

"It's all about the execution. Our Facebook ads are effective when strategically combined with engaging content & innovation," said Ford in a Tweet, which was clearly directed right at General Motors.

This move has caused General Motors to let it's fans know that it won't be “Unfriending” them anytime soon and it still “Likes” them. "Just wanted to let our millions of Facebook fans know, we're still here, and we 'like' you back!” announced GM on... its Facebook page! How else are you supposed to let all your fans know that?

General Motors is clear that it will be keeping up content for Facebook pages. It still is spending $30 million dollars on Facebook for sharing content on those pages for the four core General Motors brands Buick, GMC, Chevrolet, and Cadillac.

Ford deserves credit for beating General Motors on Facebook. Ford has more than 1.5 million likes on its Facebook page. GM's is Facebook page is around 378,000 followers.

This puts Scott Monty, head of social media at Ford, in a bragging rights position with Ford's crosstown competitor. Ford has made it clear that it isn't straying away from the power of Facebook. What company and automaker can really?

GM has taken other steps to revamp it's marketing. Not too long ago they consolidated most of their global advertising into a new ad venture, Commonwealth. This is supposed to save the company approximately $2 billion in marketing over five years (as any company still partly owned by the Government should be saving money.)

The real question everyone is asking about General Motor's... should they change it's Facebook status to “It's complicated?” Yes, since they can't seem to figure out social media.

LG's New EV Battery Plant Is a Welcome News for Tesla
Tesla Giga Berlin's New Hurdle: It's Not Only the Gov't, but Now Tesla Itself
END_OF_DOCUMENT_TOKEN_TO_BE_REPLACED