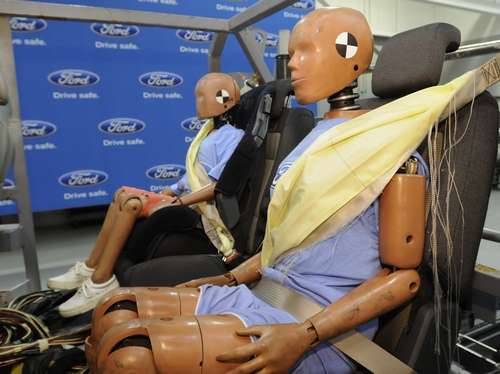 This innovative safety feature will help reduce the risk of injury in a crash for rear seat occupants. Ford's rear inflatable seat-belts help distribute the crash force evenly over five times more of an occupant's torso than a traditional seat-belt. This in turn expands its range of protection by diffusing crash pressure over a larger area.

The inflatable seat-belts combine the attributes of traditional seat belts and airbags to help provide an added level of crash safety protection for rear seat occupants. The new advanced restraint system is designed to help reduce head, neck and chest injuries for rear seat passengers. The system was developed mainly for children, young kids, and older passengers, which can be more susceptible to these types of injuries. The introduction of this innovative safety restraint system first came out on the 2011 Ford Explorer. Early sales data has shown that approximately 40 percent of Explorer buyers are parents who are ordering the rear inflatable seat-belts.

The inflatable seat-belt functions just like a standard seat belt. However, the vehicle is equipped with a special crash sensor system, which will deploy if there is an accident. The inflatable belt has a tubular airbag that will inflate with cold compressed gas through a specially designed buckle from a cylinder that is positioned below the seat. After the belt's airbag breaks through the belt fabric, it will fill with air expanding across the occupant's body.

Research done by Ford has shown that most consumers find the inflatable seat-belts the same or ever more comfortable than a standard seat-belt, the reason being the padded feeling from the inclosed airbag material and rolled edges of the belt. Also the cold compressed gas would feel no warmer on an occupant's body than the ambient air temperature. This means the inflatable seat-belt is more comfortable for most and safer.

Srini Sundararajan, who was the lead developer, will accept the prestigious award at a ceremony tonight in New York City. The development of the technology was a team effort, Sundararajan says, and he’s proud that effort is being recognized.

“Ford’s goal is to develop innovative safety technologies that give our customers more peace of mind, so it is a great honor to receive the Breakthrough Technology Award,” says Sundararajan.

The Popular Mechanics Breakthrough Awards are given out in two categories: innovators, whose inventions will make the world smarter, safer and more efficient in the years to come; and products, which are setting benchmarks in design and engineering today.

For the selection process in the 2011 Breakthrough Awards, the editors of Popular Mechanics canvassed a wide range of experts to come up with a list of worthy innovators, and then consulted dozens of past Breakthrough Award winners in fields ranging from aerospace and robotics to medicine and energy.

Winning innovators will include film director James Cameron. He is being honored for his pioneering work in CGI for building the world’s most advanced 3D camera. The cameras were used on his mega-blockbuster movie, Avatar.

Other winning products include smog-eating tile, a light bulb rated to burn for 25,000 hours, and a telescope equipped with built-in tracking cameras and a database of more than 4,000 heavenly objects so sighting stars takes less than three minutes.

Congratulations to Ford for winning the 2011 Breakthrough Award from Popular Mechanic's. We at TorqueNews hope to see many more innovative safety features on vehicles, like the rear inflatable seat-belts, in the future.