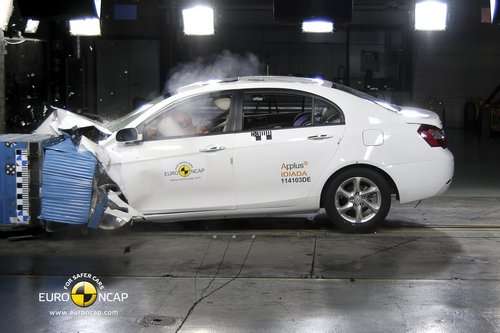 Chinese cars might be viewed by most as poor quality, but a Chinese car that will be available in the UK soon just received a 4-star Euro NCAP rating. The Geely Emgrand EC7, which received the safety rating, might prove to go beyond consumers expectations.
Advertisement

TorqueNews recently reported that Geely plans to break into the UK vehicle market. The first car to be sold in the UK by the Chinese car company will be the The Geely Emgrand EC7. It will not enter the market until the end of 2012, but the 4-star Euro NCAP safety rating could prove important to attract new buyers.

The Euro NCAP (New Car Assessment Programme) ratings are considered an important metric for determining how safe new vehicles are in Europe. It provides a realistic and independent analysis of crash testing.

The Geely Emgrand EC7 was one of six new models to achieve the 4-star rating, out of 5-stars. The other models were the Jaguar XF, Renault Fluence ZE, Jeep Grand Cherokee, Fiat Panda and the MG6.

Where the Emgrand EC7 scored particularly well was protecting child passengers. In testing of the 3-year old dummy, forward movement was slight and all dummies were properly contained by the shells of the restraints. This means that the probability of head injury is unlikely.

Even with some weak areas, overall the Geely Emgrand EC7 scored well in the majority of the test. Most likely a good sign of the safety Geely vehicles.

“These results mark a milestone for the Chinese automotive industry. It is a clear sign that Chinese car makers are building on recent experiences and rapidly investing in better vehicle safety. Even with the upcoming increased demands, five stars are expected to be within reach soon.” commented Michiel van Ratingen, Euro NCAP’s Secretary General.

“As we prepare to launch the Geely brand in the UK this high safety rating is very welcome and it will be a significant element of the total peace of mind.” said Matthew Cheyne, Market Development Director of Geely Auto UK. He added, “In the past Chinese domestic market vehicles have perhaps had an unfair reputation for safety but this latest Euro NCAP rating shows our new generation vehicles provide a competitive high level of safety and build quality.”

“Chinese manufacturing and product quality have improved dramatically over the last few years,” added Cheyne, “The factory where the EC7 is built is one of the most modern I have ever seen. It’s a state of the art, world class manufacturing facility.”

It seems if Mr. Cheyne's statements are accurate if Geely has been able to receive such good marks in a difficult safety analysis like the Euro NCAP crash test ratings.

When the The Emgrand EC7 becomes available in the UK it will have 2 body styles to choose from, a 4-door sedan and 5-door hatchback. Engine options will be a 1.5 liter mated to a manual transmission or a 1.8 liter, which an automatic will be available. All engines that will be available will be gasoline. There is no word yet on a diesel engine option. Prices are expected to start from just under £10,000 (which is roughly $15,000 US dollars) and each car will be covered by a five-year, 100,000 miles warranty.

Auto News
Chinese automaker Geely to enter UK market in 2012, US debut could be coming
Electric car sales in China on track to be Asia's largest
Kia to build third auto plant in China
Honda Accord reaches 1 million miles
Million Mile Joe honored with 2012 Honda Accord and parade
Men find it easier to maintain Car, than Girlfriend

LG's New EV Battery Plant Is a Welcome News for Tesla
Tesla Giga Berlin's New Hurdle: It's Not Only the Gov't, but Now Tesla Itself
END_OF_DOCUMENT_TOKEN_TO_BE_REPLACED