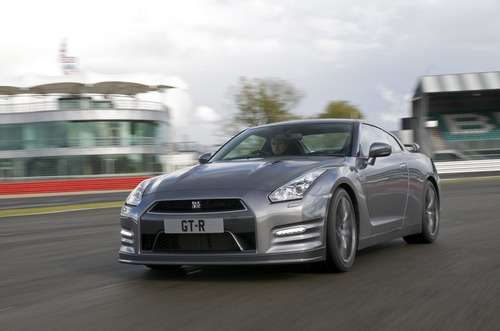 Nissan announced today the launch of the new and updated version of its much loved supercar, the 2012 Nissan GT-R. The new GT-R boasts more power, better handling, and improved efficiency. All while packing the same level of excitement.
Advertisement

Exterior and interior changes for the 2012 Nissan GT-R, are slight. The two interior changes include, blue lighting inside the tachometer ring to match the shift position indicator light and a enhanced Bose audio system. The only exterior change (if you would call it that) is a Rear View Camera will be fitted as a standard feature on all models. Luckily under the hood, the Nissan GT-R team has made some exciting changes and improvements.

Power receives a boost, taking the 3.8 liter twin-turbocharged V6 engine, from 530hp at 6,400rpm and 451 lb-ft to 550hp at 6,400rpm and 466 lb-ft. This is due to refinements and upgrades which include, improved heads, intercooler, exhaust system, and intake system. These upgrades result in better engine response and torque at mid-low speeds, as well as improved power at high revolutions.

Including the power upgrades he GT-R has improved engine and fuel efficiency. It achieves almost 20mpg, which is quite impressive for a supercar.
The GT-R's body has been reinforced around the rear part of the engine compartment and dash panel. Thus creating better and more responsive handling characteristics which improves the drivers experience.

Transmission shifts will be noticeably quieter and refined, due to a stronger design of the shift fork arm and firmer fixing bearing for the flywheel housing. Nissan will be using a special race derived differential oil, R35 Competition Type 2189E (75W140). This new differential oil will be used in all GT-R models.

On the RHD version of the GT-R, an asymmetrically designed suspension system is fitted. In the front of the car, there is harder spring rate on the left side while at the rear the suspension arm is installed upwards and downwards on the right. The GT-R's balance is not balanced when sitting stationary, but it equalizes driving. This system provides improved responsiveness, smoothness, and steering feel. As well as enhanced cornering and stability and riding comfort.

A track version of the GT-R will be available for enthusiasts who want an even more intense GT-R experience. This version was co-developed with NordRing in Japan and features only two-seats to improve weight, and has other upgrades. If you want to drive the track version of the GT-R, then you will have to be used to driving right-hand drive vehicles. It will only be developed and produced for the Japanese and UK markets. Details on this track version GT-R are expected to be released sometime in December.

The 2012 Nissan GT-R will be available later this month, on Nov. 24th, in Japan. Europe will be getting the GT-R in early 2012. Nissan has not announced a sales date for the North American market. So those eager to get their hands on one in the US, will have to wait.

Additional details on the latest iteration of the Nissan GT-R supercar are expected to be revealed by Nissan at the Tokyo Motor Show. This is when the GT-R will have it's world premiere.