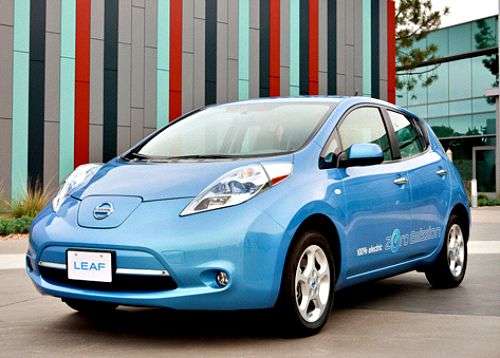 Nissan Motor Co., Ltd. has announced Nissan Green Program 2016, a new six-year environmental plan (NGP 2016). This new plan will focus on reducing the company’s carbon footprint, implementing a shift to renewable energy and increasing the diversity of resources used in production. This will include committing 70 percent of the annual research and advanced engineering budget to environmental technologies.
Advertisement

The goals of the plan include becoming the industry leader for sales of Zero-Emission Vehicles by bringing their cumulative sales up to 1.5 million zero-emission vehicles across the Renault-Nissan Alliance by 2016. They will also fervently pursue the goal of becoming the leader in fuel efficiency with 35 percent fuel economy improvement, compared with 2005, in the overall average for all Nissan vehicles sold in Japan, China, Europe and the United States.

Nissan’s corporate commitment to the environment also entails establishing a superlatively low corporate carbon footprint with a 20 percent reduction per production of each vehicle of CO2 emissions from corporate activities compared with 2005. Finally they intend to establish leadership in closed-loop recycling by boosting usage of recycled materials to 25 percent, also by 2016.

"More consumers are demanding products in line with their values, including cars and trucks with a lower carbon footprint. At the same time, we are using technology to make our factories greener and more efficient," said Nissan president and Chief Executive Officer Carlos Ghosn. "Nissan wants to be part of the solution toward a sustainable society - for the sake of the planet and as a significant competitive advantage and a strategic differentiator in the global manufacturing sector."

As part of Nissan commitment to environmental stewardship, NGP2016 is the pillar of sustainability in Nissan's Blue Citizenship, the company's strategic approach to corporate social responsibility. The announcement of NGP 2016 is just one of many planned initiatives under Blue Citizenship.

Implementing the plan
The plan in part relies upon the development by the Renault-Nissan Alliance of an all-new fuel cell electric vehicle (FCEV) together with their strategic partner, Daimler.

To achieve leadership in fuel economy, an all-new front-wheel drive hybrid model will be introduced along with an all-new plug-in hybrid model based on Nissan's unique approach to the technology. They also intend to introduce the next-generation of continuously variable transmissions, reaching 20 million units of cumulative CVT production since its launch in 1992.

To reduce their corporate carbon footprint Nissan plans to expand the scope of measurable objectives, including logistics, offices and dealerships as well as production sites. They also plan to introduce renewable energy sources for manufacturing and related facilities.

Nissan plans to achieve leadership in closed-loop recycling by enacting a recycled resource usage rate of 25 percent by 2016. This will be accomplished by using recycled materials from production waste or end-of-life vehicles and parts into new vehicles and reduce the consumption of rare earth elements.