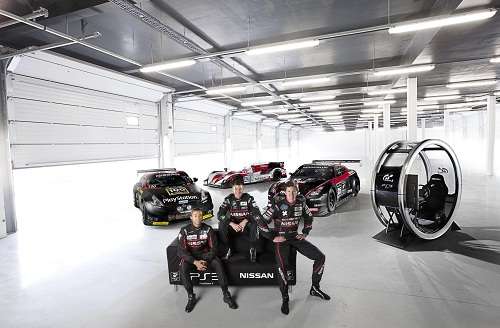 Have you every watched races on TV and thought, "Hey that doesn't look so hard, I can do that!" Now is your chance to prove it as the 2012 PlayStation Gran Turismo Academy has gone live, giving you a chance to from virtual to real racing!
Advertisement

For those that are not familiar with the Gran Turismo Academy, it is a competition that gives potential race car driving hopefuls a chance to go from driving in video games to potentially a real career as a race car driver. The competition is sponsored and put on by Sony and Nissan, and played via PlayStation's Gran Turismo racing game online.

This means the Gran Turismo Academy puts the ultimate racing prize at stake, an intensive Driver Development training program that has helped turn previous winners into professional and successful racing drivers with Nissan. Earlier this year several GT Academy winners secured a podium finish at the 24 Hours of Dubai and one raced against legendary motorcycle racer Valentino Rossi.

No surprise there is expected to be a huge entry list for this year's competition!

To participate in the Gran Turismo Academy all competitors need is access to a PS3 that can connect to the internet. Also they must registered with the PlayStation Network. Then you need to download the free and brand-new GT Academy qualification challenges, which are of course themed around the hugely popular Gran Turismo racing games.

There is an eight-step online qualification format, which was developed by legendary Gran Turismo creator Kazunori Yamauchi. This will take gamers and race fans on a fun and exciting journey. The different challenges reflects the various driving skills required to master the fine art of becoming a professional racing driver. Entrants have eight weeks to complete these difficult driving contests, ranging from handling powerful Nissan rear-wheel-drive performance cars and mastering cornering techniques at high speeds, through to setting lap times in wet and challenging conditions.

Whether players are enjoying Gran Turismo 5 game for the first time, or are hardened PlayStation racers, the GT Academy qualification offers fun racing action for everyone. Players can also challenge friends, colleagues and family for bragging rights by monitoring scores via the ‘PSN Friends Lists'.

"This time around, we've designed a GT Academy qualification format as part of the Gran Turismo series on an unprecedented scale and aimed towards a wide variety of players," said Kazunori Yamauchi, President of Polyphony Digital, the company behind the wildly successful Gran Turismo racing games.

"I felt that the only way to really do it right for the fourth GT Academy was to create a format where not only veteran Gran Turismo players, but also players who have never tried a driving simulator before, can experience the depth of race driving and the fun and excitement of time trials." commented Yamauchi.

Darren Cox, General Manager Nissan in Europe, added: "It is great to see a range of Nissan cars added to this year's online qualification process, as well as new challenges that relate closely to GT Academy's goal of turning PlayStation gamers into real racers.”

What makes the GT Academy so great is that anyone in the world can participate that is over the age of 18 and holds a driving license in their respective county. This is competition is not limited to any specific country and reflects the global appeal and reach of racing (and video games.)

The online qualification stage of GT Academy runs until the early hours of Monday June 25th, 2012. The fastest 16 gamers from each territory will qualify for National Final events. A maximum of 16 further National Final places will be up for grabs via a series of Live Event Gran Turismo 5 competitions.

A total of six winners will emerge from each participating GT Academy territory to attend the GT Academy Race Camp at Silverstone, located in the UK. This is a boot camp for aspiring racing drivers and will be quite intensive mentally and physically. (So you couch potatoes better start doing some push-ups!)s

The 2012 GT Academy Champion will then be put through one of the most advanced ‘Driver Development' program in the world in preparation for competing in the prestigious Dubai International 24 Hour Race in a full race-spec Nissan 370Z GT4 car.

Think you have what it takes to be a professional race car driver? For details about the 2012 GT Academy and to participate visit: http://eu.gran-turismo.com