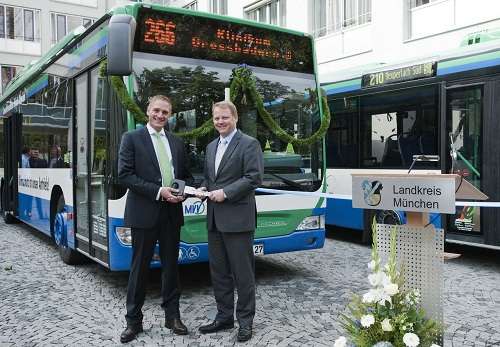 A Mercedes-Benz Citaro G BlueTec Hybrid Omnibus has just been added to fleet of hybrid buses that are available to transport people in Munich. Hybrid buses that have been successful before the Mercedes brand hybrid have paved the way for this new creation.
Advertisement

The very first hybrid bus deployed in the Munich administrative district for the Munich Regional Transport vehicle fleet was a smashing triumph. Because of that positive welcome, on September 22, 2011, Ulrich Piotrowski, the Market Launch Manager for Mercedes-Benz hybrid and electric buses, presented a symbolic key to Jörg Schuchtmann, the Operations Manager of Busservice Watzinger GmbH & Co. KG, according to Mercedes-Benz.

The “Munich District Energy Vision” initiative is Munich’s new pilot project which is attempting to reduce the district’s energy consumption by 60 percent by the year 2050. It also is trying to meet the 40-percent demand with renewable forms of energy. Its first attempt is to use the Mercedes-Benz Citaro G BlueTec Hybrid Omnibus to meet the goal.

The Citaro will be available for passenger public transport around Munich. The Munich district is attempting in many ways to subsidise more hybrid buses and carry out a long-term tests on them. The Citaro is one such vehicle. For an example, the overall emissions balance, is one area for research and incentives.

According to Ulrich Piotrowski, on the basis of positive past experiences, the Munich administrative district has decided to use the Citaro. Piotrowski said in a statement: “In terms of exhaust emissions and noise reduction, hybrid as an eco-friendly drive technology stands out as the best option at the moment, because of its practical advantages and high level of electrification.”

The Mercedes-Benz Citaro G BlueTec Hybrid will be used on one of the operator’s most important routes, which says a lot for the belief in the vehicles. It will run the route number 266, running between the Planegg suburban railway station and the Grosshadern hospital.

This being a great route to show the benefits of the Citaro, Jörg Schuchtmann made this statement: “A dense network of bus stops, the central business district nearby and high passenger use provide ideal conditions to test and raise the public profile of the pioneering technology of these vehicles. The hybrid bus will now allow an almost noiseless and emissions-free service in the vicinity of the hospital.”

Mercedes-Benz Citaro G BlueTec Hybrid is the only hybrid bus with the ability to complete a distance of up to ten kilometers on electricity only. This can be done given ideal topographical conditions. The bus will be able to reach and stop at bus stations silently and continue in the silently. Lastly, the Citaro has a system of four electric hub motors which draw their current from one of the world’s largest in-vehicle lithium-ion batteries made.

Jon Knox wrote on September 27, 2011 - 9:12am Permalink
I would like to know who manufactured the Hub Motors for this MB city bus. Anyone know? thanks
Car guy wrote on October 1, 2011 - 9:06pm Permalink
I am glad to see Munich and more other German cities becoming green. Clean car and bus energy sources are great for the citizens. A good example, set by Mercedes-Benz, to follow.