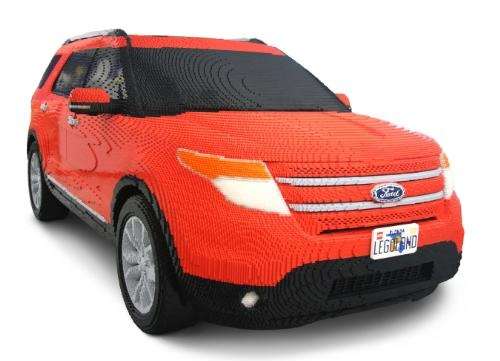 2011 Ford Explorer made from 380,000 LEGOs displayed at LEGOLAND Orlando

An exciting and unique full-sized Ford Explorer was created from more than 380,000 LEGO bricks at a Chicago Assembly Plant. The masterpiece LEGO vehicle will be making its debut at LEGOLAND Florida.
Advertisement

This is an exciting venture for Ford Explorer and LEGOLAND® Florida theme park. It is the beginning of a wonderful partnership between the two giant entities.

The new LEGOLAND Florida theme park, which will open on October 15, 2011, is the second park of this nature in the United States. It is the fifth and largest LEGOLAND theme park in the world. The park is made of more than 50 million LEGO bricks.

The Ford Explorer that was made at the Chicago plant and taken for display at the theme park, took over 2,500 hours to create from LEGO bricks. It is a stunning spectacle created out of bright red LEGOs by 22 different designers. The car weighs 2,654 pounds and is supported by a 768-pound interior aluminum base.

In addition to being a theme park full of rides, attractions and fun, LEGOLAND Florida now has a Ford Driving School. This school allows children to experience the excitement and fun of being able to drive their own vehicles. It gives the children a sense of responsibility by being behind the wheel of a car as they drive it. Children only drive at a maximum speed of 3 miles per hour.

The 2011 Ford Explorer will first make its debut at the historic Chicago plant, where the vehicle was manufactured and then it will make its way to the new 150-acre LEGOLAND Florida theme park just outside Orlando. The car will be driven on a trailer with transparent sides so other drivers on the road can see the LEGO Explorer as it makes its way to the park.

Tracy Magee, the Ford Experiential Marketing manager made this statement in a press release: “Ford is excited to support the alliance between LEGOLAND Florida and the Southeast Ford dealers. The LEGOLAND Florida Explorer and the Ford Driving School attraction are great opportunities to showcase our products and safety messages to families and visitors in a unique way.”

Adrian Jones, the LEGOLAND Florida General Manager made this statement in a press release: “We're less than a month from opening and the anticipation level is incredibly high. This is the only park of its kind in the world built exclusively for kids ages 2 to 12, and it will be a total departure from anything families with young children have seen before. It's a completely immersive experience, engaging kids' imaginations and their sense of adventure through interactive play."