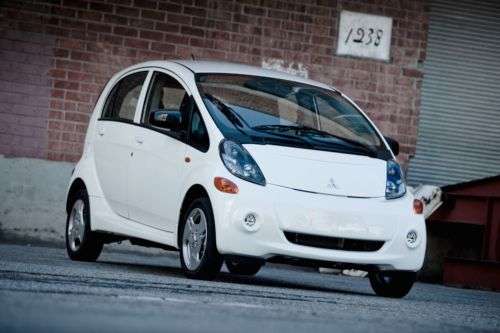 With high gasoline prices and consumer interest in hybrids and electrics, car buyers looking to “refuel” with electric may like the EPA rated 126 MPG equivalent delivered by the Mitsubishi i.
Advertisement

The EPA rated the all-electric car as best-in-segment in “fuel” efficiency in both mile-per-gallon equivalency and driving range.

The Mitsubishi i earned an EPA-rated 126 MPGe in city driving and 99 MPGe in highway driving for an average of 112 MPGe. The EPA also awarded the i, a "real world" driving range of 62 miles. The "real world" EPA driving evaluation incorporates battery-sapping aggressive driving and operating the vehicle in high ambient temperatures with the air-conditioning blowing.

The EPA also rated the vehicle's “LA4” driving cycle range at 98 miles. The EPA LA4 driving cycle test covers a distance of approximately 7.5 miles and includes numerous brief stops along the route to mimic in-town driving and its accompanying starts and stops for traffic signals.

Mitsubishi has worked to improve the driving range of the 2012 Mitsubishi i: The 98 mile range is attributed to software upgrades and a revamped regenerative braking system.

"We feel that with the combination of capability, affordability, and high level of efficiency offered by the 2012 Mitsubishi i will prove very appealing to consumers considering EV transportation," said Yoichi Yokozawa, President and CEO of Mitsubishi Motors North America.

Mitsubishi said that with a Manufacturer's Suggested Retail Price of $27,990 for the base ES model, before a federal tax credit of $7,500 and various state financial incentives that are subject to availability of funding, the Mitsubishi i is the most affordably-priced mass-produced electric vehicle available in the United States.