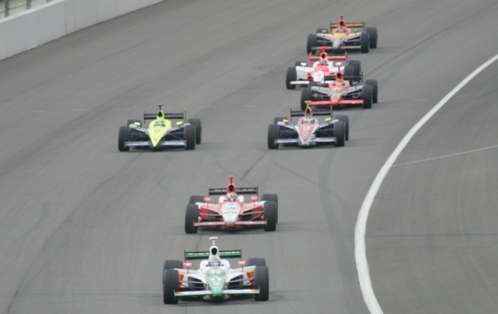 IndyCar Series Returns to Fontana in 2012

The IZOD IndyCar series will race next year at the Auto Club Speedway in Southern California’s city of Fontana after a seven year absence, IndyCar announced today (July 5).
Advertisement

The event in Fontana will be a fall night race. IndyCar said the race date will be announced later but that tickets will be available on Sept. 12.

"We feel the time is right to bring IndyCar racing back to Auto Club Speedway," said Randy Bernard, chief executive officer, INDYCAR. "We want to maintain the diverse line-up of ovals on our schedule and the addition of Auto Club Speedway adds a great venue that was built for the high-speed, wheel-to-wheel excitement of IndyCar racing under the lights."

Racing team owner Roger Penske originally built the two-mile oval track to run open wheel cars, then under the CART sanctioning body. The inaugural 500-mile race in 1997 opened to a full house when the venue had seating for about 50,000. Total grandstand seating now is 92,100.

In 2005 Dario Franchitti won the last race at Fontana.

IndyCar has two other California venues, one a street circuit in Long Beach in April and the other a road course in California’s wine country at Infineon Raceway in Sonoma in August.
The Fontana track is 75 feet wide with a 15 foot apron, turns have 14 degrees of banking and the front stretch is 3,100 feet, about 59 percent of a mile. The facility sits on 568 acres, has 1,800 reserved infield parking and five exits with 15 routes to major Southern California freeways.