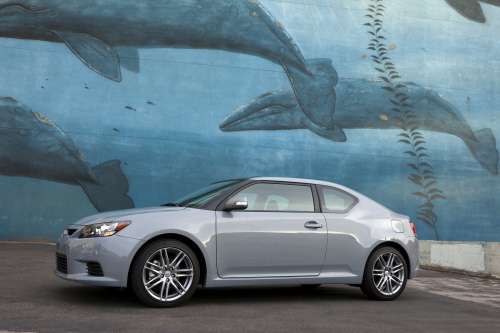 Sales were down overall at every level in June for Toyota, Lexus and Scion cars and trucks in the United States. The bright spot nestled within the glum numbers was the Scion tC sports coupe, whose sales made a huge 73% leap in June compared with 2010.
Advertisement

Toyota executives say their people are hanging in there and are buoyed by the fact that first-half sales for the company were down only 3.9% compared to year-ago levels, even with production hampered by the devastation that rocked Japan earlier this year.

But in recent weeks, production has ramped up and the result has been a strong influx of cars and trucks to American dealerships, providing healthy 2011 stock for showroom floors.

“We can't say enough about the remarkable efforts our team members and suppliers have made here in the U.S. and in Japan to restore production," said Don Esmond, senior vice president of automotive operations for Toyota.

"June marked a significant turning point for Toyota as sales moved up over last month. Toyota dealers now have a good supply of cars and trucks, and that selection is growing every day. Returning production and new marketing programs will put us in a great position to take advantage of the summer selling season and with an influx of new products slated this year, we're extremely optimistic about the second half of 2011."

As a niche division Scion sales are meager compared with its big brothers, Toyota and Lexus. And overall Scion sales slid 14.8% compared with June 2010 numbers, with 3,456 units sold. But the tC sports coupe (pictured) gives Scion and its parent, Toyota, something to beam about. The tC made a 73.6% gain over 2010 with 2,053 cars sold in June. The xD (575 units) xB urban utility vehicle (828) sold modestly.