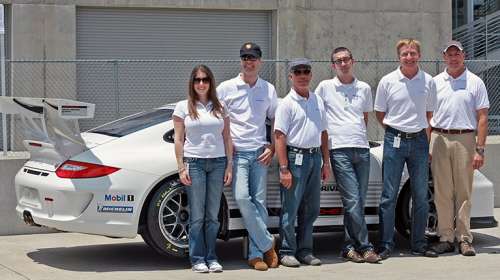 The first-ever Cup is the same weekend as the 39th ADAC 24 Hours of Nürburgring Race in Germany. The pit crew (pictured) hopes its experience goes viral because it will document the experience on Porsche's "The Hub" social media press site on the Internet.

The Porsche Carrera World Cup matches 200 competitors and their Porsche 911 GT3 Cup racers against each other and the Nürburgring Nordschleife.

When American Le Mans Series GTC champion Melanie Snow joins the other Porsche 911 GT3 Cup racers on the starting grid in Germany, she’ll be the only female driver. And she'll have this special Porsche ground support crew to get her to the finish line.

The Porsche employee team, selected from submitted video and written essays detailing their passion for motorsports, will be on hand to capture and share the insider’s view on what it takes to compete internationally, what it feels – and sounds – like from the driver’s seat and who’s who in the world of Porsche motorsports, according to a statement Friday from Nick Twork, Porsche spokesman.

The race is 70.2 miles long, achieved with six complete laps of 15.5 miles each. About 200,000 spectators are expected to watch the action.

The Porsche Carrera World Cup includes drivers from Porsche’s 18 brand trophy and challenge series and counts as a competition round toward Porsche Carrera Cups in Germany, Scandinavia, France and Italy.

Racing fans can order a T-shirt with Melanie Snow’s motto, “Some Girls Chase Boys, I Pass Them,” hats and a special edition limited run die-cast model of her 911 GT3 Cup car (http://shop4.porsche.com/usa/).

Hawke Fracassa writes about cars from Detroit for TorqueNews.com. You can reach him [email protected]