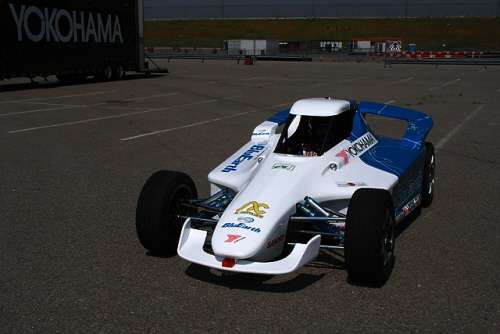 A rear-wheel drive, open-wheel AC Propulsion electric race car has set a record at the Pikes Peak climb in Colorado. The car won the Exhibition Class and set an EV record with a time of 12:20:084. This bettered its own record-breaking time of 13:17:575 last year by a minute.
Advertisement

The Yokohama-sponsored race car from AC Propulsion, a designer, developer and maker of electric vehicles, was the fastest performer among cars and motorcycles at Pikes Peak.

“AC Propulsion electric drive systems deliver performance,” said Tom Gage, AC Propulsion CEO. “Our string of Pikes Peak EV records -- especially this one, where we are well into the 12-minute bracket -- clearly demonstrates that electric vehicles can get up the hill fast.

“Now that more people are buying EVs, it's important to offer really good performance. For us, the old racing slogan holds: win on Sunday, sell on Monday."

Engineers for Team Yokohama created a high-performance cooling system for the car's 200-kW induction motor so it could function at maximum output as it ascended up Pikes Peak while breaking the record while using the same motor. That motor exceeded the previous EV record by 65 seconds.

The winning car was built by Summit Motorsports and driven by Ikuo Hanawa of Japan. In winning it used Yokohama BluEarth tires and SANYO Electric Co. lithium-ion batteries.

The Pikes Peak AC-180 motor, rated at 268 horsepower at 6000-7000 rpm and 258 lb.-ft of torque from 0 to 5000 rpm, is a high-performance version of the AC Propulsion AC-150 motor found in the BMW MINI E, a team spokesman said. The drive system utilizes tzero-technology that also powered the MonoTracer MTE-150 to a first place victory in its category and achieved the highest efficiency overall in the 2010 Progressive Automotive X PRIZE, he added.

The Pikes Peak International Hill Climb (nicknamed the "Race to the Clouds" by drivers) is the best-known hill climb in the world. Racing to the 4,301-meter summit, participants cover a 12.4-mile course beginning at the 2,862-meter level. The race is famous for the severity of its conditions: rapidly changing temperatures and weather, a combination of tarmac and gravel surfaces and 156 turns, a team spokesman said.