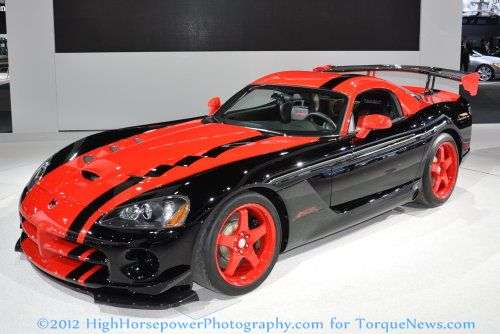 One sad fact that likely went unnoticed by most who read Chrysler’s February 2012 sales results was that there were zero Dodge Vipers sold last month – marking the first time in the last 10 years and possibly the first time since the Viper was introduced where there were absolutely none of the American supercars sold.
Advertisement

When I saw that there were zero Dodge Vipers sold last month, I began looking back through sales reports from the last 7 years (that is all that is available on the media site) and I was unable to find a month where there were no Vipers sold. Even though the production of the legendary Viper ended in July 2010, dealerships have been selling “new old stock” 2010 model year Vipers since then with the monthly sales volume ranging anywhere from 5 units sold (November 2011) to 54 (August 2010) with 20 examples of the Viper SRT10 leaving dealerships in this past January.

However, with the sales figures from around the United States coming in for February 2012, the company did not sell a single supercar for the first time since production ended. Based on looking back through the sales reports, I was unable to find a month where there were no Vipers sold so this could be the first time that no Vipers were sold since the car was introduced for the 1992 model year. Even in 2007 where there was no model year version of the Viper – there were still Vipers sold each and every month.

The fact that there were no Vipers sold last month is sad for lovers of American performance cars and Mopar Performance aficionados but it speaks to the excellence of the 2010 Dodge Viper SRT10 that it took almost 2 years after the end of production before a month came where no one purchased a new Viper from the dealership. A quick search of the internet found that there are still brand new 2010 Dodge Vipers available in the United States (Viper authorities Woodhouse Dodge and Tomball Dodge still have plenty of Vipers in stock) so the sad reality is that no consumer wanted to buy a Viper last month. After more than 20 years since being introduced, the demand for the fabled Dodge Viper has hit rock bottom but the optimistic reason for the lack of Viper demand last month rests on the horizon in the form of the 2013 SRT Viper.

Over the course of February, the media was flooded with spyshots and teasers of the upcoming 2013 SRT Viper so one strong possibility for no one buying a Viper last month is that those individuals who have $100k laying around to buy a supercar are waiting to meet the 2013 Viper when it is unveiled in April at the 2012 New York International Auto Show. The next generation Viper is expected to pack somewhere in the area of 700 horsepower from a new, larger V10 engine with driving aides that should help make the 2013 Viper one of the best performing cars in the world – in any venue.

As a lover of Mopar Performance and American muscle, I am saddened by what is the end of an era with not a single Dodge Viper sold last month but with the next generation Viper only a little over a month away – I cannot wait to see what the future holds for the legendary supercar.

As a side note, if you are in the market for a 2010 Dodge Viper and you have been unable to find one, Woodhouse Dodge of Blair Nebraska has 4 SRT10 Coupes in stock. Also, Tomball Dodge (the dealership who provided the 2010 Viper SRT10 ACR that recently set the Nürburgring lap record) in Texas has 13 new Vipers including 6 SRT10 Coupes, 5 SRT10 ACR Coupes (three of which are Viper Black and could, in theory, be the Viper that set the Ring record), and two SRT10 Convertibles. If you have between $87 and $106k laying around, hit up Tomball of Woodhouse to snatch up one of the final remaining Vipers. Click here for a look at the Viper ACR setting the Nürburgring lap record.