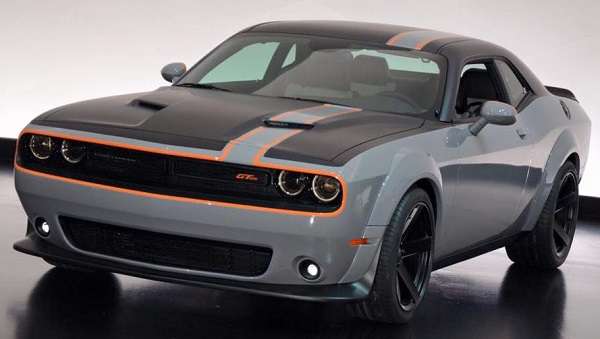 Yes, Mopar Built an All Wheel Drive Challenger for SEMA

When the Chrysler Group offered up a teaser image of the new Dodge Challenger with a badge that read GT AWD, we speculated that it would be an all-wheel drive muscle car and we were right – as this mean looking Mopar muscle car will indeed spin all four wheels with Hemi power.
Advertisement

A few weeks back, the Neiman Marcus Christmas book introduced their special edition Ford Mustang and in the details, they stated that it was all-wheel drive. The news of an AWD muscle car quickly spread around the industry, but just as quickly as we got our hopes up, the folks at Neiman Marcus clarified that their Mustang is not all-wheel drive. Fortunately, Mopar has come to the 2015 SEMA Show with a car to fulfill those AWD muscle car dreams with the wicked Dodge Challenger GT AWD.

How heavily modified is the chassis? Well, to make the AWD bits fit cleanly and safely under the Challenger, the team enlarged the “tunnel” that holds the transmission and the driveshaft, allowing the transfer case to fit nicely above the exhaust system. This beast sits so low to the ground that it was impossible to get my camera in there for a picture, but I was able to fit my head under the car for a good look and I can say that the fitment of the AWD system was clean enough to pass for a normal production layout.

Again, this is strictly a concept car built for the SEMA Show, but in my opinion, the build on this AWD Dodge Challenger looks production-friendly – if not production ready.

More Than Just AWD
While the all-wheel drive system is the key feature on the Dodge Challenger GT AWD Concept, the Mopar crew wanted this to be more than just an all-wheel drive muscle car. As you can see in the image above, a widebody kit was added to allow the 10 inch wide front wheels and the 11 inch wife rear wheels to fit within the body lines. Behind those huge wheels is a set of heavy duty brakes which were borrowed from the Dodge Charger Pursuit police car and to improve stance and handling, a sport suspension setup has been added under all four corners.

Once the handling and braking systems were upgraded, Mopar turned their attention to the power output of the Dodge Challenger GT AWD. Based on the Challenger R/T, this muscle car packs the popular 5.7L Hemi, which normally produces 370-375hp depending on the transmission chosen, but Mopar added their stage 3 Scat Pack setup, which tacks on an additional 75 horsepower and 44lb-ft of torque – leading to a total output in this car of 445hp and 454lb-ft of torque.

Finally, once all of the working components were upgraded, Mopar added the striking grey, matte black and Header Orange paint scheme on the outside while the interior gets orange-trimmed Katzkin leather seats and a flat-bottomed SRT steering wheel.

While the Dodge Challenger GT AWD is only a SEMA Show concept right now, this car is being used to gauge consumer interest in an all-wheel drive muscle car. The company has all of the parts at their disposal and they all fit so cleanly into the chassis that this could become a production reality someday. Should that day come, an AWD Challenger would truly change the muscle car segment but for the time being – this is just one wicked SEMA Show car.