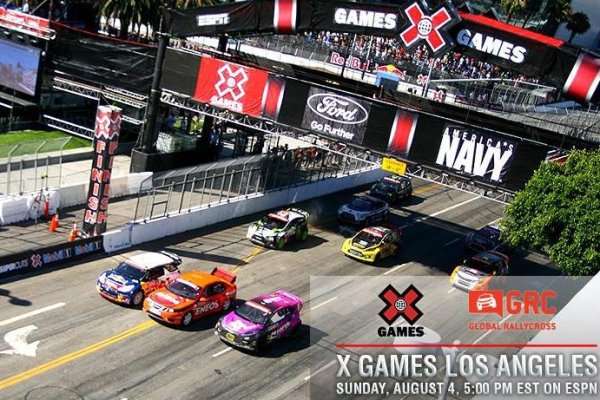 The racers of Global RallyCross take to the track of the X Games Los Angeles this weekend and winning the final X Games GRC gold of 2013 won’t be easy as the shootout in the City of Angels will feature the biggest field of the 2013 season.
Advertisement

The Los Angeles X Games Global RallyCross event is set to start at 5pm EST on Sunday and when they do – 18 racers will be fighting for the gold medal.  Joining the 13 regulars who have been around for the majority of the season, the X Games LA GRC field will include 2 names from the 2012 season, two names that have competed on and off through 2013 and one new driver who has made a big splash in the world of Rally America.

First of all, the 13 2013 Global RallyCross regulars will include The nearly unstoppable OlsbergsMSE racing team with Patrik Sandell, Tanner Foust, Brian Deegan and Toomas Topi Heikkinen piloting Ford Fiesta rally cars.  Joining them in Ford entries are Steve Arpin and Scott Speed from the OMSE2 team along with Ken Block and his Hoonigan Racing Division team. There will be three entries from the Subaru PUMA Rallycross team including Bucky Lasek, Dave Mirra and Sverre Isachsen; two Dodge Dart teams piloted by Travis Pastrana and Bryce Menzies and the sole Mini rally driven by Liam Doran – who happens to be the only non-Ford driver to win a GRC race this season.

Returning after a successful campaign in 2012 is Rhys Millen Racing with two Hyundai Veloster rally cars piloted by Rhys Millen and Rally America champ David Sterckx.  Millen bowed out of the GRC after
Hyundai pulled their factory backing following the 2012 season but he will return without the help of the company for at least the LA X Games.  Millen’s teammate in 2012 was Stephan Verdier and like Millen, Verdier will make his 2013 GRC debut but he will do it in the same self-owned Subaru WRX that he raced in 2011.

Finishing off the X Games LA Global RallyCross field will be two Volkswagen Polo race cars that have competed at other X Games events in other countries this season with a fair amount of success.  Anton Marklund finished 6th in Brazil before finishing 4th at the Munich X Games.  His teammate in Munich, Mattias Ekstrom, finished 4th and 5th in the two Munich races and while Ekstrom will not be racing in LA – that same car will be piloted by European RallyCross top dog Timur Timerzyanov.  Timerzyanov has logged quite a bit of unsuccessful seat time this season while filling in for Travis Pastrana in the Dodge Dart rally car so it will be interesting to see if the Russian can fare any better in the VW.

The Global RallyCross portion of the 2013 Los Angeles X Games is scheduled to start at 5pm EST with television coverage being offered on ESPN but those who can’t catch it on ESPN can watch the action online via the WatchESPN website.  The ESPN broadcast is scheduled to run from 5pm to 7pm…hopefully the majority of that time slot is reserved for racing and not a mix of racing, skateboarding and other non-motorsport events.