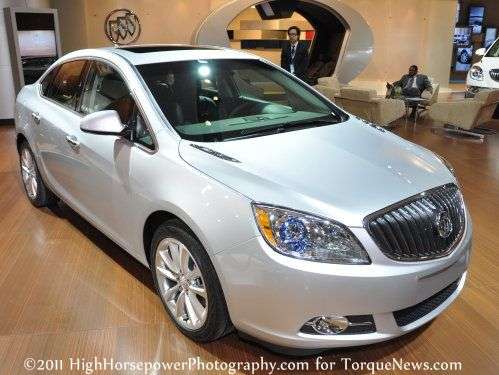 When the 2012 Buick Verano was unveiled at the 2011 Detroit Auto Show, the industry was introduced to the second use of the platform first seen for the new Chevrolet Cruze but the Verano is far more than just a rebadged Cruze.
Advertisement

General Motors has been criticized in the past for doing too much platform sharing, with the same basic vehicles with different badges offered across a variety of product lines. Many attribute simple rebadging to the demise of the Pontiac and Oldsmobile brands but this practice allows for costs associated with platform development to be spread across multiple vehicles - thus allowing for lower overall vehicle costs. The problem is that when there isn’t enough effort put into differentiating the vehicles sharing a common platform and sheet metal, you often see one vehicle suffer since consumers can get the same vehicle from another brand. However, with the 2012 Buick Verano, General Motors shows that they have learned a lesson from their past mistakes as the Cruze-based Buick bares very little resemblance to the Chevy with which it shares a great many components.

Along the front end of the 2012 Verano, the lower fascia openings including the foglights are similar to the 2011 Chevrolet Cruze but that is where the similarities up front come to an end. The larger, chrome grill of the Verano is vastly different from the two-piece grill from the Cruze and where the Chevy has an angular, almost squared off hood the Verano features long, flowing lines and the now-familiar hood vents similar to what we see on the popular new LaCrosse.

The greenhouse (between the wheels) of the two vehicles are very similar but thanks to the amount of differentiation in the front and rear, when you look at the 2012 Verano the phrase “rebadged Chevy Cruze” never comes to mind. The front end is very distinctly Buick, as the Verano wears the brand styling very well but out back, the new compact sedan gets its own unique rearend treatment. Where the Cruze wears large, rounded taillights the 2012 Verano has sharp, angular tail lights with chrome “eyebrows” accenting both sides. The rear fascia of the Verano houses the license plate in an indentation that flows out to the face of the rear bumper, leaving the area between the taillights smooth while the Cruze has the license plate mounted on the rear face of the trunk. Even the rear glass and trunklid are changed, as the Buick compact sports a rounded rear window with the trunklid reflecting that rounding, while the Cruze has a very square rear window and trunk opening.

Inside, there is no question that the 2012 Buick Verano is not a rebadged Chevy Cruze, as the compact Buick brings the same luxurious fit and finish that we find in the LaCrosse and new Regal. Don’t get me wrong - I enjoyed my time in the 2011 Cruze and found the interior to be very comfortable for such an affordable car but the Verano takes it to the next level. The materials are far more plush and comfortable with soft touch surfaces scattered throughout the interior finished in the same colors as the soft leather seating surfaces. Like the Regal and LaCrosse, the new Verano will feature a state of the art sound system with a large touch screen display.

Thanks to the model on stage at the 2011 Detroit Auto Show, we know that a manual transmission will be offered on more than just the base model of the 2012 Verano. For the Chevy Cruze, the manual transmission is only available on the entry-level base model and adding any significant options to the Cruze requires you to step up in trimlines - and away from the fun of a manual transmission. The manual transmission being offered in multiple trimlines I likely attributed to the fact that the Verano will not share engine option with the Cruze, as the 1.4 and 1.8 liter engines from the Chevy won’t be seeing any time in the new luxury compact Buick. The only engine mentioned right now for the Verano is the 2.4L 4-cylinder engine found in the Buick Regal, putting out 177hp and 170lb-ft of torque but there is a rumor that we will see a GS model, sharing the 220hp turbocharged mill from the new Regal GS.

Overall, while the 2012 Buick Verano shares a platform and side-lines with the 2011 Chevy Cruze, changes made to the front, rear, interior and underhood areas allow this new Buick to easily set itself apart from the compact Chevy. Check out the gallery below for a closer look at the 2012 Buick Verano from the 2011 Detroit Auto Show!