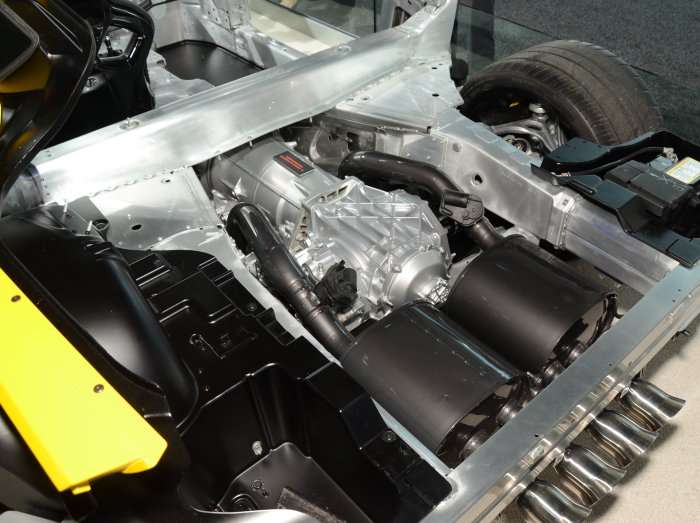 Why the Camaro and Corvette Don't Share Every Transmission

The Chevrolet Camaro and Corvette share the LT1 and LT4 engines, but they don’t share all of their transmissions and with so many readers asking why, today we take a look at the most basic reason why the two top GM performance cars don’t share the same gearbox options.
Advertisement

These features have been the same since the C7 Corvette was introduced for 2014 and the Camaro for 2015. While the Camaro has the turbo-four and V6 engines not offered in the Corvette, the two Chevy performance cars share the LT1 and LT4 V8s, leading many people to wonder why those V8 engines aren’t mated to all of the same gearboxes.

Some people speculate that it is due to the fact that Chevy wants to have some differences between the two cars, but the more obvious reason that GM doesn’t just stick the same transmissions in both cars comes down to packaging.

Of course, GM could develop a rear-mount transmission for the Corvette that incorporates the technology of the new 10-speed that was developed in conjunction with Ford Motor Company and the automaker could develop a version of the Corvette’s 7-speed manual that bolts up to the back of the Camaro’s engine. However, in terms of the components currently at use in the Camaro and Corvette, the two cars don’t share their gearboxes because they have completely different driveline layouts.

Rumors of New Transmissions
While the 5th generation Camaro has relied strictly on the 6-speed manual, there are rumors that Chevrolet will eventually offer up an engine-mounted 7-speed similar to the gearbox used in the C7 Corvette. Adding a gear to the Camaro would make it a bit more efficient on the top end while also allowing the engineers to gear it more aggressively for low-end acceleration.

It had long been expected that the new Corvette ZR1 would come with a rear-mounted version of the Camaro ZL1’s 10-speed, but when it was introduced, we learned that the 755hp Vette still has the 7-speed manual or the 8-speed automatic. If GM didn’t bother to engineer a rear-mounted 10-speed for the new ZR1, it seems unlikely that they will make one anytime soon.

Of course, if the rumors are true that the C8 Corvette will transition entirely to a mid-engine design – which I do not believe is true – the company might be focusing on an entirely new gearbox design for their next generation supercar.