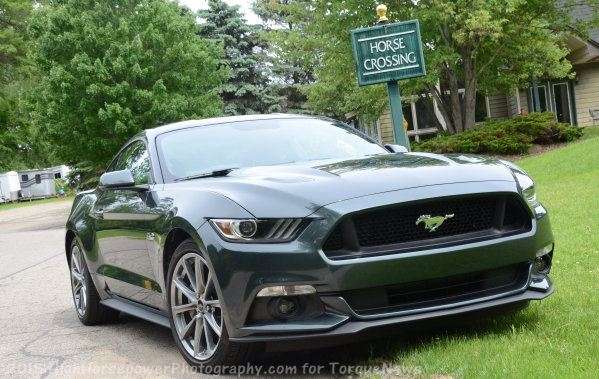 One of the coolest features of the 2015 Ford Mustang GT is the launch control system and while testing the new Blue Oval pony car, I found the Mustang’s system to be the best of the modern muscle cars - and I put together the brief video below that lets you hear the roar of the 5.0L V8 when launching hard from a stop and running through a few gears.
Advertisement

The Ford Mustang first got Launch Control in the previous generation Boss 302, but with the 2015 Mustang, it is standard on all GT models. Ford’s Launch Control is the best system I have used and I have extensively tested the similar systems in the Dodge Challenger and the Chevrolet Camaro. My favorite aspect of the Launch Control system in the Mustang is that when you are in track mode with the traction control system activated, the launch system is always armed and ready to go – and it always does a remarkable job of getting the car moving in a hurry.

Mustang Launch Control Beats the Rest
I find the Launch Control system in the 2015 Ford Mustang GT to be the best in the segment based on two factors – how easy it is to use and how well it works.

The Mustang’s Launch Control is always armed when you are in track mode, so it really doesn’t get any easy than that, and the Mustang gauge cluster lets you know that Launch Control is activated. Provided that traction control is on, all you have to do is use the wicked cool toggle switches on the center stack to go into track mode and Launch Control is ready. From there, whenever you are at a stop, you can hold the clutch in, floor the gas and the car will automatically hold the engine RPM wherever you have designated between 3,000 and 4,500. When you let the clutch out, the traction control system works quickly to get you out as quickly as possible and with this system, I found that the Mustang GT is very capable of reeling out consistent 5.1 0-60 times and consistent mid to low 13 second quarter mile times (based on the on-board timing system). The system works great and it is easy to use.

The 2015 Chevrolet Camaro launch system is kind of “hidden”, and you don’t know that it is on – or that it exists – unless you have read up on how the system works. You have to hold down the Traction Control button for 7 seconds and when you do, both the stability control and traction control lights on the dash let you know that you are in track mode. Once the system is armed, it works just like the Mustang system, but I don’t think that it worked as well in my tests. I spent a day playing with the launch control feature of the Camaro SS 1LE and the fact that this handling package is easily the grippiest muscle car Ive ever driven actually makes it a little harder to launch with the launch control package. The Camaro system has the car launching at 5,000rpm and when it does, the tires spin for an instant and at the same time, the sticky 1LE tires get hot enough to grip at the same time that the traction control system pulls power from the tires. The combination of those two things happening at the same time causes the engine to bog down badly and in my practices launching the Camaro 1LE, I was able to get out far quicker just launching on my own without the gadgetry.

Finally, the 2015 Dodge Challenger also has a Launch Control feature that, in my experiences, works just as well as the system in the Mustang GT when it comes to getting the car off of the line. The Dodge system does a great job of pulling enough power to calm the tires, but it does so smoothly enough that the Hemi engine doesn’t bog down. I think that the Challenger’s system might be the best at balancing traction and power levels, allowing you to rip to 60 in the mid 4 second range with the Scat Pack model. However, the Challenger system is activated by a button on the dash (varies by trimline) and you have to then follow prompts on the dash, so it isn’t something that is ready to go when you come to a stop. The fact that you have to activate the system every time you use it is what puts it behind the Mustang GT’s system.

If the Challenger's system was always armed and always ready to go, like the Mustang GT, I might call Dodge's system the winner - but the facts that the Mustang system is always armed in Track Mode and that it works so well makes it the best in the segment in my opinion.

The Mustang GT Launch Control in Action
While testing the 2015 Ford Mustang GT Premium with the 6-speed manual transmission, I made this short video of the car launching with the Launch Control feature. In this video, the launch RPM is set to 4,100, as I found that to be the sweet spot with the tires and conditions available.

As you can see in the video, the camera is mounted on the rear bumper so that you can hear the 5.0L engine roar as I bring the engine up to 4,100rpm, hold it there for a second and let out the clutch. On this run, I hit a 5.1 0-60 time and while I suspect that some practice would allow me to pull better short times without the system, the Mustang system allows you to pull consistent low 5 second 0-60 times without any skill whatsoever.

Roger Beutler wrote on August 12, 2016 - 5:27pm Permalink
I've gone in & set the LC rpm & checked the box to turn it on. I tried several times & the rpm just goes past what I set the LC to. Then I thought maybe I had to have the car in Track Mode. Tried that with the same result. The gauge clusted shows LC & I thought that meant it was activated. Help.
Mike wrote on November 15, 2016 - 3:19pm Permalink
You have to stomp on the gas. If you feather it, it will not engage.