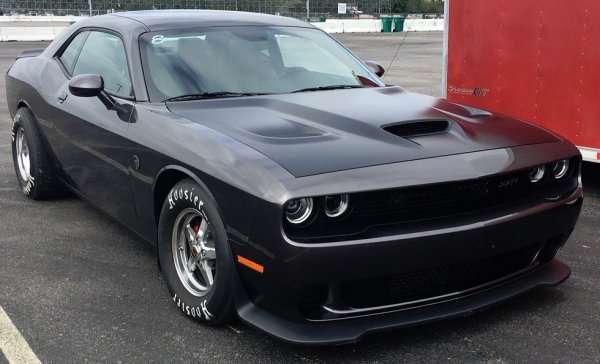 A couple of weeks, we brought you the news that Bill Gamble had set a new record for the quickest Dodge Challenger SRT Hellcat with a manual transmission to make a trip down the quarter mile, with a time of 10.25 and a speed of 140 miles per hour. Gamble and his Challenger were back at the track this past weekend and thanks to a combination of cooler weather, more seat time and more nitrous – Bill was not only able to break his own quarter mile record, but he also became the first driver of a manual transmission Hellcat car to run a 9-second quarter mile time.

Oh, and while he didn’t run a quicker ET than the record-holding automatic transmission Hellcat Challenger, Bill Gamble did set a new record for the highest trap speed in a quarter mile drag race by a Hellcat-powered car.

The 1st Manual Hellcat in the 9s
For those of you who missed our first piece about Bill Gamble’s manual transmission Dodge Challenger SRT Hellcat from a few weeks back, here is a quick refresher.

In addition to the extra power, Bill Gamble’s Hellcat Challenger has an upgraded clutch, a stronger driveshaft, a stronger rear differential and big, sticky rear tires on lightweight wheels.

That isn’t a very long mod list, but when combined with Bill’s ability to get away from the starting line in a serious hurry, this Hellcat Challenger has proven itself to be the quickest in the world.

This past weekend, Bill Gamble hit the track hard on his first run, laying down an incredible 9.798 at 147.94 miles per hour with his Hellcat Challenger. That beat his previous record by almost a half second, but more importantly, his trap speed was the quickest ever turned by a Hellcat car – auto or manual. The previous best trap speed was turned in by the current record-holding automatic Hellcat owned by the late “TopCat”, which ran just over 145 miles per hour.

Most impressively, Bill Gamble was able to lay down a 1.484 60-foot time on his first run, which played a big part in his record time.

On his second run of the day, Gamble didn’t get off of the line quite as well, pulling a 1.612 short time and running “only” a 9.824. However, with a trap speed of 149.88 miles per hour, he was ever-so-close to being the first Hellcat driver to hit the 150mph mark on a quarter mile drag strip pass.

On his final run of the day, Gamble had hoped to turn his best time of the day, but when he ripped his Hellcat Challenger out of the hole, there was a crunch in the rear end which ended his day. The power of the bottled Hellcat Hemi proved to be too much for the aftermarket rear end and all of that Mopar torque sheered the teeth off of the pinion.

As a result, Gamble is forced to replace the rear differential in his Hellcat Challenger, but when he gets back to the track in cooler temps – we could see more records set. In the meantime, check out the video below of the record run.