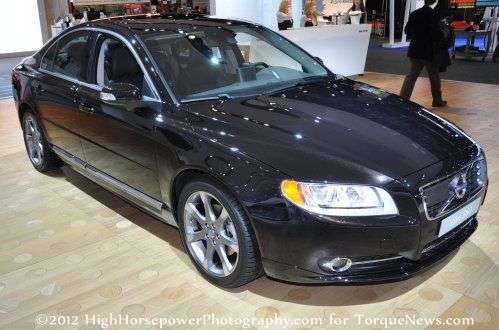 The National Highway Traffic Safety Administration has announced a new recall of 2011, 2012 and 2013 model year Volvo S80 sedans over a concern that the transmission may not properly downshift – increasing the likelihood of an accident should the Swedish sedan stall in traffic.
Advertisement

This new NHTSA recall pertains to a select group of 2011 through 2013 Volvo S80 sedans and in these models, the electronic transmission control module (TCM) may have a software issue that could prevent the transmission from shifting from fifth down to fourth gear. In total, there are 1,469 Volvo S80 sedans included in this transmission recall.

The automatic transmission downshifts from 5th gear to 4th gear as the vehicle decelerates in order to prevent the engine RPMs from getting too low. When the RPMs drop too low, the engine often stalls. Having your vehicle suddenly and sporadically stall as you decelerate can become quite a problem if you are in traffic as you would lose the power brake and power steering assist. This would make continuing to slow a problem as well as increased difficulty in steering the car to the side of the road with the loss of motive power. This presents an obvious safety risk so the Volvo folks have issued the recall to get these vehicles back to dealerships before anyone gets hurt.

The 2011-2013 Volvo S80 transmission recall is set to begin on or around July 19th 2012, at which point owners will be asked to return to their friendly neighborhood Volvo dealership where the transmission control module. This service will be provided free of charge and considering the fairly simple “plug and play” repair process to fix the problem, the time spent at the dealership waiting for repairs should be fairly brief.

This is the second recall for the Volvo S80 sedan after the company issued a recall for 2012 model year S80s earlier this year over a concern that a faulty wiring harness could prevent the seat belt pretensioners system or the airbag system from working properly.

Luckily for Volvo, the S80 is not one of their bigger sellers so the actual numbers of these two recalls are fairly low but any recall can hurt an automaker – especially after being sold off to a Chinese firm. However, Volvo has always placed a great deal of pride in their reputation for safety so even though there have been no reported incidents or accidents, Volvo is doing the right thing by recalling them quickly.