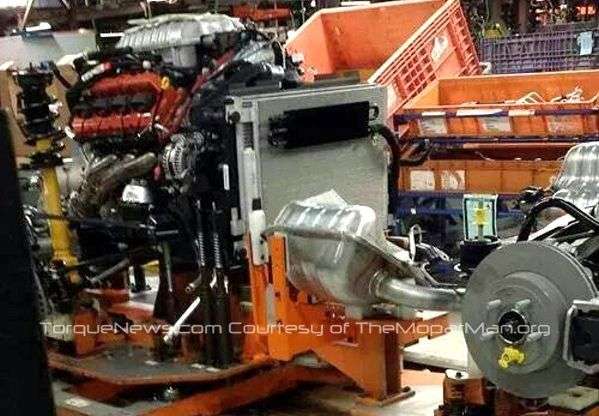 TorqueNews Exclusive: This Might Be the First Picture of the SRT Challenger Hellcat Hemi

While some images have caught what is believed to be the new Hellcat Hemi under the hood of a Dodge Challenger test mule, this image appears to be the first full engine image that we have seen of Chrysler’s new 600+ horsepower supercharged Hemi.
Advertisement

This image comes from our friend The Mopar Man and it shows what looks to be the first clear shot we have seen of the supercharger Hellcat Hemi that will soon power the SRT variants of the new Dodge Charger and Dodge Challenger. There is no additional information as to where this image came from before being shipped to The Mopar Man by the unnamed source, but based on what we have seen in spyshots floating around the web of the next SRT Challenger with the hood up – this certainly looks like the same engine.

This isn’t the best picture in the world, but every detail that I can see leads me to believe that this is the Dodge Challenger Hellcat Hemi sitting on one of the carts that plant workers would use to move the engine around the facility with the automated system. Right in the middle of the screen is a massive radiator and air conditioning system condenser and behind that wall of silver is the front of the supercharged Hellcat Hemi.

At the top, you can see the unique roots style supercharger hovering above a set of Hemi Orange valve covers with the black coil pack covers mounted over each of the spark plugs while a tubular exhaust manifold is tucked neatly against the side of the engine block as it channels the exhaust towards the left side of the picture.

Now, there is no guarantee that this is the SRT Challenger Hellcat Hemi or if this is even a Chrysler engine at all.

However, it most certainly looks like a modern Chrysler Hemi painted up and topped by the same supercharger that we have seen in underhood spyshots. As for the setting, the large plastic bins in the background look like the type of item you see sitting around an assembly facility, as does the apparatus on which this engine is sitting. Of course, with test cars running around with this drivetrain and the new Challengers having been introduced in New York, there is a good chance that the Brampton Ontario Assembly Plant would be building test cars in house and with so many people in and out of that plant all day with cell phone cameras – I would guess that someone snapped a quick picture of the new monster Hemi. Then again, this image could have been taken months ago and it was just now sent to The Mopar Man... but its definitely an interesting image for Mopar fans waiting for the new super Hemi.

Also in this image is what appears to be the exhaust for either a Dodge Charger, a Dodge Challenger or a Chrysler 300 along with a rear braking assembly for one of those vehicles. The brake rotors look large, but the calipers do not and the rotors seem fairly average so I don’t believe that the components in front of the radiator belong to a Hellcat Hemi powered car. They might – but I expect that the Challengers and Chargers with the 600+ horsepower engine will have a higher end rear braking system.

It has become a bit of a mystery as to when the Hellcat Hemi will arrive in the new Dodge Challenger. It was widely expected that the 2015 or 2016 SRT Challenger would debut in New York earlier this month, but with the introduction of the new models having come and gone with no mention of the new supercharged engine, we are left wondering when this new Hemi will be formally introduced.