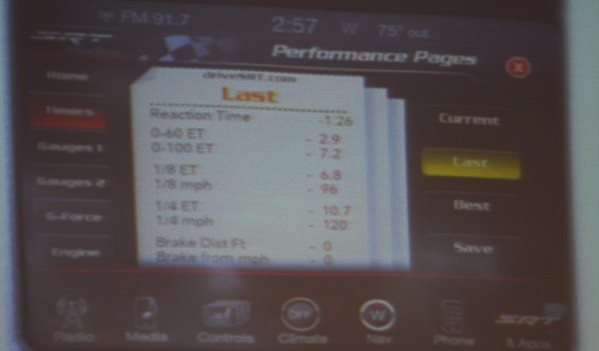 When the 2015 Dodge Charger SRT Hellcat made its grand debut in August, it was announced that it had a top speed of 204mph and a stock-tire quarter mile time of 11 second flat, but a new video clip from the automaker reveals that when fitted drag radial tires, the world’s most powerful sedan can run the quarter mile in just 10.7 seconds while moving out from 0-60 in just 2.9 seconds.
Advertisement

Yesterday morning, I attended a small gathering at the Chrysler Headquarters in Auburn Hills Michigan for an in-depth look at the new 6.2L Hellcat Hemi that powers variants of the 2015 Dodge Charger and 2015 Dodge Challenger. We were walked through a piece by piece run-down of what makes the supercharged Hemi so awesome and towards the end of the informative slide show, we saw a video of the Hellcat Charger blasting down the quarter mile with drag radial tires. We don’t get to see the whole run, but we can see the timing screen that clearly displays the elapsed time for the 707 horsepower sedan of 10.7 seconds.

The Quickest Sedan in the World
When the Chrysler Group announced earlier this year that the 2015 Dodge Challenger SRT Hellcat could run a stock-tire time of 11.2 and a drag radial time of 10.8 – both of which were certified by the NHRA – it shook up the performance world. Those numbers make the Challenger quicker than any stock American muscle car ever (not counting the non-street legal race models like the COPO Camaro, the Mustang Cobra Jet or the Challenger Drag Pak), but when the 2015 Charger SRT Hellcat was introduced before the 2014 Woodward Dream Cruise, Dodge brand CEO Tim Kuniskis announced that the bigger, heavier 4-door Charger was actually faster in the quarter mile.

When equipped with the stock tires, the Charger SRT Hellcat is officially capable of running an elapsed time of 11 seconds flat, making the sedan two tenths of a second quicker than the Challenger with the same drivetrain (Hellcat Hemi, 8-speed automatic transmission). However, Kuniskis didn’t announce the drag radial tire numbers for the Charger so we didn’t know how much quicker the Hellcat sedan was with good tires – until yesterday. A 4,500lb Sedan in the 10s
During the Hellcat Hemi presentation at the Chrysler HQ, SRT drivetrain engineer Chris Cowland walked us through a collection of slides that told us everything that we could want to know about the new supercharged V8. Among those slides was one that showed the Charger SRT Hellcat with a set of non-production rear wheels and drag radial tires testing on the quarter mile.

On the right side of that slide was the SRT timing screen from inside the car, showing the performance numbers for that particular quarter mile run. This included a 0-60 time of 2.9 seconds, a 0-100 time of 7.2 seconds, an 8th mile time of 6.8 seconds and a quarter mile time of 10.7 seconds. This screen also showed us an 8th mile trap speed of 96 miles per hour and a quarter mile speed of 120 miles per hour – which Chris Cowland quickly stated was slower than usual. He went on to explain that on most strong runs, the Hellcat Charger is able to hit around 126 miles per hour in the quarter mile…in a 4,500+ pound sedan. You can watch the video from the presentation below.

Potential for Even Better Times
Considering that the 2015 Dodge Charger SRT Hellcat shown in the video below hits 60 in just 2.9 seconds and 100 takes just 7.2 seconds, I would guess that this Charger got away from the line about as quickly as is possible. However, when Chris Cowland pointed out that the trap speed is usually 6-7 miles per hour faster, it brings into question that 10.7 quarter mile elapsed time. If you listen to the audio in the video below, you can clearly hear the Charger let off towards the top end of the track and that is likely why it “only” trapped 120 miles per hour. Had the driver stayed in the throttle for the whole run to hit the normal trap speed of 127 miles per hour, the Charger would have almost surely turned a faster quarter mile time – even if only a tenth or two quicker. In other words, the 2015 Dodge Charger SRT Hellcat is clearly able to run a 10.7 quarter mile time, but it seems that there is some room left for improvement with that elapsed time so private owners with some seat time in their 707hp Charger could cut their stock quarter mile time (with good tires) into the 10.5 range…and that is crazy quick for anything, let alone a full sized sedan.

Also, the Charger shown launching was fitted with full race slicks and not drag radials – but that doesn’t change the fact that the Performance Pages screen showing a 2.9 second 0-60 and the 10.7 quarter mile does not pertain to this Charger drag strip pass.

Hasham Hanif wrote on September 30, 2014 - 5:17pm Permalink
What's the news on the Non-Hellcat SRT 2015 Charger, the one with 485 bhp, like there is for the challenger. I can't seem to find any info on that, its either the 292 bhp, 370 bhp or 707 bhp.
Patrick Rall wrote on September 30, 2014 - 5:34pm Permalink
No word from the company on a "scat pack", SRT 392 or something similar with the 6.4L Hemi in the Charger. The company hasnt rolled out the full 2015 Charger SRT press release....just a piece on the Hellcat models. Should anything surface on a 392 model, I guarantee you will find it here.
Auto Motive wrote on October 14, 2014 - 7:41am Permalink
My daughter has a 392 challenger and after driving it during the summer my vette is up for sale and I will ordering a 2016 Charger hellcat. Nothing I have ever driven is so powerful in a straight line and the best touring car ever. Taking a trip across the US in a hellcat will be awesome. When you press the throttle down half way its like taking off in a jet. Pushing it to the floor at 30 it hits a 100 in mere seconds. I cannot believe it only has 470 hp. The hellcat is so powerful its actually dangerous for the A type driver who lives on a rush of adrenaline. When the challenger and charger are redesigned in 2017 base on the Fiat smaller platform and looses 500 lbs or more nothing on this planet will touch the new hellcats period. It will be a 2.5/2.8 second 0-60 car.
Thomas wrote on October 2, 2014 - 9:24pm Permalink
THe Chargers Line up will Mirror the Challengers from SXT, RT, RT SCat Pack, SRT''s
Hasham Hanif wrote on October 3, 2014 - 5:22pm Permalink
Is there anything official about that? Coz I don't see the normal SRT Charger 2015 anywhere, the only SRT is the Hellcat as of yet.
thomas hilton wrote on October 3, 2014 - 8:29pm Permalink
Nothing official yet but folks at allpar.com said that the Super bee is no longer available for 2015 cause the idea of it confuses people which it actually was a "Core SRT" charger (same goes for the yellow Jacket challenger) line the core challenger, it's been replaced by the scat pack.
Hasham Hanif wrote on October 6, 2014 - 5:37pm Permalink
So we should see a normal SRT Charger soon, with all the options of the current 2014 SRT (470bhp) but the new 2015 shape?
mike wrote on October 1, 2014 - 4:26am Permalink
Like it. How it drives?
Hasham Hanif wrote on October 1, 2014 - 4:44pm Permalink
Any idea when the full charger SRT Press Release will come? Like a rough timing sort of?
petermj wrote on October 2, 2014 - 2:53pm Permalink
Quicker than Corvette C7 Z06
MC wrote on December 24, 2014 - 1:16am Permalink
Um, no. So far the New Z06 has ran a 0-60 in 2.95 sec and sub 11 sec runs at higher MPH. Wait until its out for a month or two. Yeah it was running a stickier stock tire but still not a wrinkle wall tire like the drag radial or full slick that was run on this car in this test. The Z with a full slick will run mid to low 10's just like the 2009 ZR1 Vette does with less power. Some one without a clue always has to jump in and slam the Vette, lol...
howard wrote on October 3, 2014 - 11:38am Permalink
'...A 4,500lb Sedan in the 10s....' geezus lose a few hundred extra lbs. on this one and it might break into the 9's...i'm impressed and i'm not usually a Chrysler fan but this is one interesting ride.
Hellcat wrote on October 5, 2014 - 4:18pm Permalink
I want to see the Challenger Hellcat & Charger Hellcat line up for a 1/4 mile showdown.This has to happen in order to crown one of them king.
Leo wrote on March 15, 2015 - 10:14am Permalink
stopped your mumbo Jambo the Nissan GTR still the best 0 to 60 2.4 and and 2.7 sec 10 sec in quarter check out you tube Challenger Hellcat was on TFL car Challenger Hellcat 0 to 60 over and over. This car engine Hemi build in Mexico and transport to Canada to install it in body build by Canadians, Shut up it's a Cando Mexi muscle car. So tell that to the owner of Dodge/Chrysler the Italian my final ingredients pasta.
Money wrote on March 31, 2015 - 12:46am Permalink
You do realize this is a family sedan, and the Nissan GTR is not. This car can perform but also fit 5 adults in there no problem. So please know what your talking about before you post, you really sound ignorant. Also this car is going for 63k the GTR is 101k to 150k depending on the package you get.
bilal wrote on April 25, 2015 - 10:38pm Permalink
i smell jealousy but you are not to blame. i mean charger is sooooo beautiful with 4 doors, GTR on the other hand is fast but not beautiful. after test driving GTR multiple times, i bought Charger Hellcat. what a fantastic car!! i'm so glad i made the right choice by buying charger hellcat.. i can kill GTRs, cameros, mustangs, Audis.. ahhhh what a car!!!
Scott Sobotka ... wrote on August 12, 2015 - 11:04pm Permalink
i would like to see the charger shed a few pounds and turn that supewrcharger up about 10psi and look out to everyone, take it to the street outlaws and challenge for the number 10 spot- lol
Matt wrote on January 30, 2016 - 8:02pm Permalink
It won't do anything if it can't put the power to the ground. DODGE has the same width tires on the Hellcat as it does its over 200 hp less SRT if that makes any sense at all.