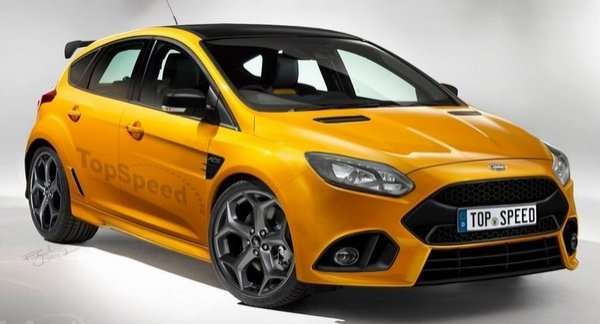 The image above is a rendering done by the artists at TopSpeed of the upcoming Ford Focus RS, which will make its global debut on February 3rd and mark the first time that the highest performance Ford compact will be sold here in the United States.
Advertisement

Ahead of the 2015 North American International Auto Show in Detroit, it was widely expected that the new Ford Focus RS would be among the high performance debuts for the Motor Company in the Motor City. However, we “only” got the Shelby GT350R Mustang, the 2017 SVT Raptor F150 and the Ford GT supercar, so hot hatch lovers were left wondering when the first Focus RS would finally show its face on US soil.

Well, we know now that like the 2015 Ford Mustang, the next generation high performance Ford Focus RS will be unveiled via a live global introduction on the morning of February 3rd. Ford hasn’t offered up any real information on the Focus RS, but they have rolled out the exciting teaser video (below) showing the new super hatch in action.

TopSpeed Rendering of the Focus RS
While Ford Motor Company has recently rolled out the video below showing a heavily camoflauged Focus RS test car, the automaker has not given us a good look at the high performance hatchback. Fortunately, the folks at TopSpeed have penned the Focus RS in the image above. Thanks to one of their skilled artists taking spy shots and videos to pick apart and piece today the various styling cues, TopSpeed was able to bring us a look at what the Focus RS could look like when it debuts next week.

As you can see, the Ford Focus RS from TopSpeed is very much a more aggressively styled version of the Focus ST. This includes large fog light bezels with brake cooling ducts, a deep reaching front fascia, a large central grille opening with some added styling lines through the middle, dual ducts on the hood and a low profile rear spoiler. The TopSpeed Focus RS also has small vents in front of the rear wheel openings – likely to help cool the rear brakes – and some SVT Raptor-like vents in the fenders that “flow” back into the doors. Finally, while this Focus RS has similar wheels to the American Focus ST, this rendering of the RS package has a sportier stance with what looks to be more substantial flares around the rollers.

Mustang EcoBoost Power, AWD
We don’t know anything about what will motivate the Ford Focus RS that is coming to the USA, but we can make some speculations based on the rumors floating around the internet.

First off, it is widely believed that the new Focus RS will use the same 2.3L EcoBoost 4-cylinder that is featured in the 2015 Ford Mustang. In the Mustang, the 2.3L EcoBoost makes 310 horsepower and 320lb-ft of torque. Considering that the Focus ST is such a great performance car with 252hp and 270lb-ft of torque, a jump to 310 and 320 could be enough to take the American hot hatch scene by storm. However, rumors insist that the Focus RS will have closed to 350 horsepower – which would likely put the torque output up closer to 400lb-ft.

So, check out the Ford video of the Focus RS test car below and tell us in the comments what you expect to see when the Focus RS debuts next week.

Parks McCants wrote on January 30, 2015 - 8:11pm Permalink
Despite my Honda Si and Vintage Porsche 911 racing connection, I've always been a Ford-Euro-Focus fan. Damn good looking and relatively affordable, Ford metric performance sets the bar in club and rally sports circles. Bring it on!
Jon wrote on February 2, 2015 - 11:58am Permalink
Why is this render based off a 2014 model. The 15 is totally different.
Jason wrote on February 2, 2015 - 12:09pm Permalink
They've basically cloned some bits off the old RS onto a standard ST. It won't be available in orange, not an RS colour.