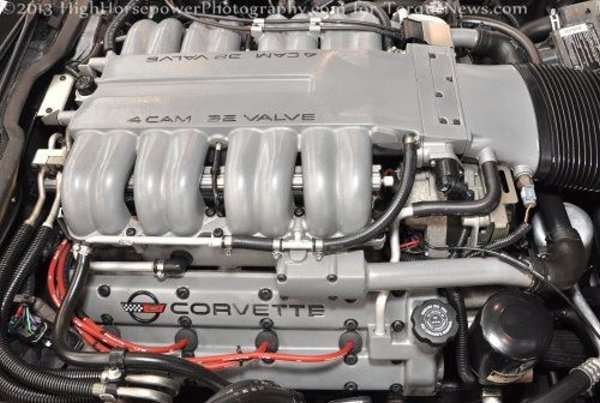 New information has arrived in the General Motors which suggests that the 2018 Chevrolet Corvette will have a new supercharged LT5 engine – almost certainly in a new higher performance package which may or may not be called the ZR1.
Advertisement

Back in December, information arrived in the General Motors service computer system indicating that the Chevrolet Corvette would be getting aa new LT5 V8. Back then, the information suggested that the LT5 would be an all-aluminum V8 with a dual overhead camshaft construction and direct injection. This came as a surprise since the rest of the current GM V8 engine program is based on pushrod engines (not DOHC), but with no additional information, there was really no other way to interpret that information last year.

Well, new information on the LT5 has arrived in the General Motors computer system, this time popping up in the RPO code search listings, and it seems like this engine description could better fit under the hood of the C7 Chevrolet Corvette ZR1.

This is a GM-built aluminum V8 engine which runs on gasoline, measuring 6.2L and utilizing direct injection, variable valve timing and – most importantly – a supercharger.

There is no additional information, but it is hard to look at the modern General Motors lineup and imagine that they have developed another supercharged V8 for anything other than the Corvette ZR1. We could most certainly see this supercharged engine under the hood of a future Cadillac super-sedan or maybe even the long-rumored Camaro Z28, but the odds are good that when the supercharged LT5 arrives for 2018 – it will almost certainly be found in the most powerful Corvette ever.

Bigger Supercharger for the LT5
It is likely that the LT5 supercharger will be the Eaton R2650, which will play a big role in the LT5 offering more power than the Corvette Z06’s LT4. The LT4 uses an Eaton R1740, which only moves 1.7L of air, but the new R2650 moves 2.65L of air. This 52% increase in supercharger volume should allow the LT5 to make far more power than the LT4, with rumors suggesting an output in the area of 750 horsepower.

Eaton introduced this new supercharger at SEMA last year, but they said that it would debut on a production model before becoming available via the aftermarket. It seems likely that the Corvette ZR1 with the LT5 will be that production model, especially with the Corvette Z06 LT4 using the smaller Eaton R1740.

Just the added supercharger volume alone would allow the LT5 to be considerably more powerful than the LT4, but that isn’t likely to be the only difference between the two V8 engines. The LT5 will likely have unique cylinder heads and a unique exhaust system, but most importantly, the Corvette ZR1 (or any other model with the supercharged LT5) will almost surely have a higher volume cooling system than the LT4. As a result, the LT5 should offer more power for longer periods of time – hopefully doing away with the limp mode issue that has plagued Z06 owners who spend much time on the race track.

If there is a Corvette ZR1 coming for 2018 with this new LT5 V8, we should be learning about it within the next few months, unless GM waits for Los Angeles or Detroit next year – both of which will give the 2018 ZR1 a shorter-than-usual model year run.