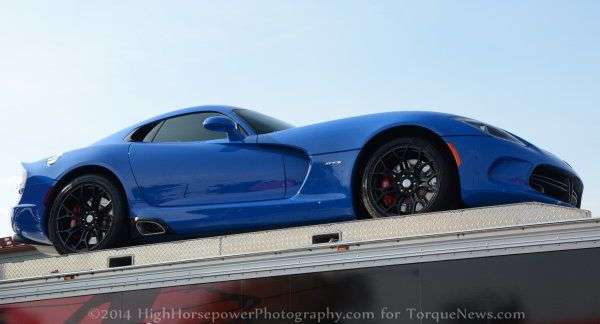 A Supercharged Dodge Viper Could Be on the Way

The Dodge Viper has always been the top dog in terms of performance from the Chrysler Group until the introduction of the new Hellcat Charger and Challenger, but if some rumors floating around the Mopar world prove to be true – the next generation Viper could pack a supercharged V10 that will blow away anything that has ever been built by an American automaker.
Advertisement

When the Chrysler Group rolled out the new 2015 Dodge Challenger SRT Hellcat with 707 horsepower and 650lb-ft of torque – making it considerably more powerful than the V10 tucked under the hood of the current Dodge Viper – many people speculated that the Hellcat Hemi would eventually make its way into the Viper as well. Those hopes were dashed when several Chrysler engineers stated that the Hellcat just wouldn’t fit in the modern Viper engine bay…leaving many to question what the SRT team will do to put the Viper back on the top of the horsepower wars.

Well, according to the folks at Allpar.com, the answer could come in the form of a supercharged V10 that would most certainly offer more power and torque than the Hellcat powered Charger and Challenger – as well as more power than almost any sports car sold in the world. Best of all, Allpar’s inside sources claim that there are already some supercharged Viper V10 engines in the SRT shops so this blown beast could arrive very soon.

Imagining a Factory Supercharged Viper
For the Dodge Viper to beat the new Hellcat Hemi powered Dodge Challenger and Dodge Charger, it would need to have more than 707 horsepower and 650lb-ft of torque. The current Dodge Viper offers 645 horsepower and 600lb-ft of torque so the SRT drivetrain wizards don’t need to do all that much to encourage the V10 engine to make an extra 55hp and 55lb-ft of torque. They could probably reach those goals by tweaking and possibly enlarging the current, naturally aspirate V10 engine, but with the success of their new supercharging program – adding a blower to the Viper V10 makes a whole lot more sense.

When calculating how much power a supercharged (or turbocharged) engine will make, figure that for every 14 pounds of boost you jam into an engine, you roughly double the power output so the current Viper V10 running 14 pounds of boost would roughly make 1,320 horsepower. That is a crazy number and please keep in mind that this estimation process is very rough. Lots of variable affect the actual output, but this math offers a very crude idea of what the SRT crew could do with a supercharger setup and the current Viper V10.

Realistically, if the SRT powertrain engineers were to strap a supercharger to the 8.4L V10 and force in around 7psi of boost, the Viper could pack 800 horsepower and 700lb-ft of torque. That would most certainly allow the next generation Viper to blow away the in-house competition as well as the new Chevrolet Corvette Z06 and almost anything else in the world. In fact, 800 horsepower and 700lb-ft of torque would make the Viper the third most powerful car in the world – trailing only the McLaren P1 and LaFerrari…both of which cost well over a million dollars.

What is Stopping Dodge from Building an 800hp Viper?
Since before the 2013 SRT Viper was introduced, rumors suggested that the highest ranking folks in the Chrysler Group management chain wouldn’t allow the new Viper to overpower the Ferrari F12 Berlinetta. This stems from the fact that Fiat owns both the Chrysler Group and Ferrari…and the Italian bosses who oversee the whole company don’t want the fastest Dodge to beat out the fastest Ferrari. The F12 has 730 horsepower and 508lb-ft of torque so that would seemingly put a very low ceiling on the possibilities for the Viper. However, with the introduction of LaFerrari with 950 horsepower and 664lb-ft of torque, Ferrari really has no reason to worry about the Viper challenging the most powerful and fastest car coming out of Maranello. A supercharged Viper would likely have more torque than LaFerrari, but there is little chance that SRT would pack it with more than 950 horsepower.

Thanks to LaFerrari, there seems to be room in the Fiat-Chrysler family for a new Dodge Viper with 800 horsepower and if you believe the rumors from the normally very reliable folks at Allpar, a new “most powerful American production car ever” could be right around the corner.