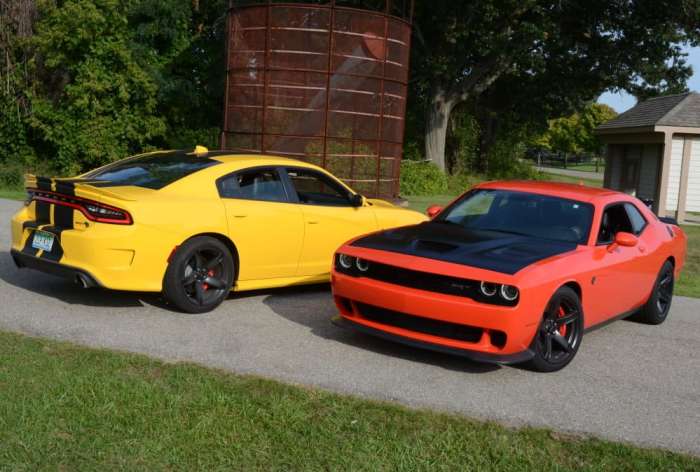 Supercharged Dodge and Jeep Models Grossed Over $3-Billion through 2018

The supercharged 6.2-liter Hemi from the Dodge Challenger, the Dodge Charger and the Jeep Grand Cherokee has already brought in more than $3 billion through the first four model years of availability and that number is going to keep climbing over the next few years.
Advertisement

When the supercharged 6.2-liter Hemi was introduced in 2014 for the 2015 Dodge Challenger and Charger, there were people who didn’t think that the idea of a 707-horsepower road car would pay off. There were people within FCA who were concerned that the company would end up losing money on the development of the engine, as they didn’t believe that there was enough demand for so much power in a time when so many automakers were focusing on fuel economy. Of course, there were skeptics outside of the performance car world who insisted that the popularity of such an engine would be short-lived, making it a bad decision in the long run.

Production numbers for the 2015 through 2018 model years have hit the internet, so we have unofficial figures detailing how many Hellcat-powered vehicles have been sent out into the world. While unofficial, these numbers are widely accepted around the internet as being correct, with the Hellcat numbers coming from Hellcat.org and the Trackhawk numbers coming from Scott @thejeep_guy. FCA has not offered up exact, official production numbers for any of these models but in speaking off the record with insiders, I have been told that these numbers “appear to be accurate”.

For the 2018 model year, three more models joined the lineup using the basic Hellcat Hemi architecture, including the Demon, the Widebody Challenger and the Jeep Grand Cherokee Trackhawk. As we all know, Dodge built 3,300 examples of the 840-horsepower Demon, along with 1,775 standard-width Challengers, 1,876 Widebody Challengers, 2,462 Chargers and 7,456 Trackhawks for a total of 16,860 vehicles built for 2018 with the supercharged Hemi.

When you add them all up, the 2015, 2016, 2017 and 2018 model years have accounted for a total of 46,256 vehicles built with the supercharged Hemi. Of course, not every single unit has been sold, but they will all be sold at some point, while these are currently “production numbers”, they eventually become sales numbers.

Keep in mind that some people didn’t believe that the company would break even on the development of the engine, which more-than-covered in 2015 and these numbers do not include any models from the 2019 model year.

Gross Receipts
Before getting into the money earned by the Hellcat Hemi, I want to offer some quick details on how I came to these numbers.

I do understand fully that MSRP is not what the company actually makes on a vehicle. I also know that some of these cars sold for way over MSRP and others sold for way under MSRP and I understand that the actual cost of the car – both based on invoice pricing or MSRP – varies from one vehicle to the next.

With all of that in mind, I have come up with conservatively-low average MSRP numbers for each vehicle. I know that it isn’t realistic to simply use MSRP since so many of these vehicles are heavily optioned, but at the same time, there is no need to inflate the numbers for the sake of this discussion. In the long run, the actual number would be slightly higher or slightly lower, but we are talking about billions of dollars from a project that some people expected to fail.

When you add up those totals which are likely lower than the actual MSRP of these vehicles when you factor in options, you get a total of $3,440,908,000. For those who are bad with numbers, that is almost three and a half billion in gross receipts from vehicles powered by the supercharged 6.2-liter Hemi.

Needless to say, the gamble to introduce one of the most powerful production engines in American automotive history has paid off for Dodge, Jeep and FCA. With the arrival, popularity and high price of the new Challenger Redeye - and the promise of a Hellcat-powered Ram truck - the $4-billion mark is within reach.

Bubba wrote on October 18, 2018 - 4:26pm Permalink
Will any of the authors sources die voltage a production cost for at least one of these vehicles? I imagine it’s not a $25,000 more than a basic charger, and the basic charger has the cost less then it’s invoice price to produce. I think the hellcat team that initially did this in their spare time deserves one huge freaking bonus
PLMCRZY wrote on October 23, 2018 - 8:03pm Permalink
Hi Patrick, Just to set the record straight. Currently, ALL modern MOPAR production numbers originate from [email protected] As you know, just because some guy has a copy of my chart or it is posted on some forum does not make those the ultimate sources. -=PLMCRZY=-