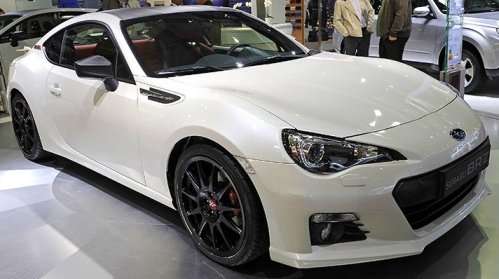 One of the less heralded vehicles currently on display at the 2012 Paris Motor Show is the Subaru BRZ XT Line Concept – a dressed up version of the sporty rear drive coupe with a trimline name that pays homage to an old school Subaru performance coupe.
Advertisement

For those not familiar with the Subaru XT name, the new Subaru XT Line Concept is based on the sporty two door Subaru coupes that were available from 1985 to 1991. The angular little Subaru XT (known as the Alcyone XT in many markets) of the 1980s-90s offered all wheel drive and a turbocharged so while the drivetrain was vastly different from what is available in the new Subaru BRZ – the fact that the XT was the last compact 2-door sports coupe from the Japanese automakers helps to bring some relevance to this new concept car name.

The unique features of the Subaru BRZ XT Line Concept begin on the outside where plenty of carbon fiber has been added with a new rear diffuser, rear spoiler, roofline and mirrors made from the lightweight, high strength material with a “dry finish”, low gloss carbon design. Next, 11 spoke, 18 inch lightweight wheels painted gloss black and fitted with bright red wheel centers sporting the new XT logo allow a great look at the bright red brake calipers under all four wheels. A big set of exhaust tips protruding from the unique rear splitter and the exterior upgrades are capped off with red and carbon fiber XT Line Concept badges on the front fascia and the C pillars.

Inside, the dry carbon fiber look is continued along the top of the gauge cluster and in the door panels while sport seats wearing the XL Line Concept logo and ultra bright red leather really help the interior pop. There is also bright red stitching on the black leather shift boot, the emergency brake handle boot, the leather steering wheel, on the leather door panel portions and on the floor mats.

Unfortunately, this great looking Subaru BRZ XT Line Concept does not receive any reported performance improvements so this concept car is powered by the same naturally aspirated 2.0L Boxer engine that sends 200 horsepower to the rear wheels via a 6-speed manual transmission. I expect that it is still a blast to drive but it doesn’t pack the turbocharged engine that the performance world has been hoping for.

Interestingly, the Subaru display at the 2011 SEMA Show featured a fully restored Subaru XT and with the introduction of the new BRZ XT Line Concept, could the XT be an upcoming high performance trimline for the BRZ? Many have expected that the automaker will eventually release a higher performance BRZ with the STI trimline designation but the STI models have typically been known for their all wheel drive performance measures. The BRZ was designed specifically to be a rear wheel drive sports coupe so it seems very unlikely that a BRZ STI would introduce all wheel drive to this lightweight coupe. However, many Subbie enthusiasts hope and expect that there will be a turbocharged model coming in the near future – leaving me to wonder if the XT name will be used rather than STI since the BRZ is a rear drive model. This could allow the company to differentiate between their rear wheel and all wheel drive performance models if the RWD models carried the XT designation while all wheel drive models like the Subaru WRX STI would wear the STI logo as a sign of all wheel drive capabilities.

On the other hand, the Subaru BRZ XT Line Concept could simply be nothing more than a styling study concept using an old school trimline name. However, are we to believe that Subaru bringing a gorgeous original Alcyone XT to SEMA last year followed by a BRZ concept wearing the XT name is simply a coincidence?

As we head into the heart of the American auto show season, hopefully we will soon know more about upcoming high performance variants of the Subaru BRZ and the Scion FRS.