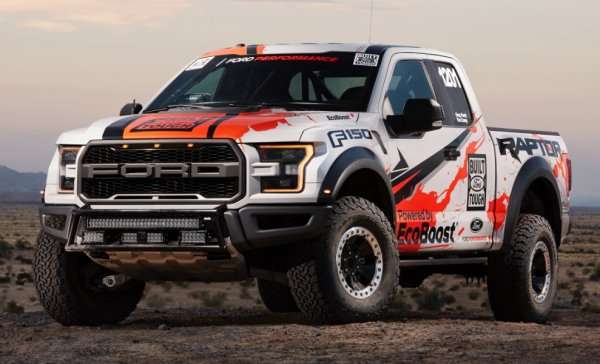 A new 2017 Ford F150 Raptor that is mechanically identical to the trucks reaching dealerships around the country recently participated in the grueling Baja 1000 off-road race, finishing 3rd in the Stock Full class and then driving the team home – in a race where 128 vehicles didn’t make it to the finish line.
Advertisement

In the world of off-road racing, the Baja 1000 is one of the most difficult races in the world while likely being the most difficult race in North America – making it the perfect test for the 2017 Ford Raptor F150. The Motor Company has billed this new Raptor as the most capable ever, but this new high performance F150 has a handful of new features which have yet to be proven in the real world. Most notably, the new 10-speed automatic transmission which was developed jointly with General Motors has been a point of concern for some, while others are curious to see how the new, highly touted four wheel drive system performs in the real world.

Well, those components weren’t proven in the real world until Foutz Motorsports took the 2017 Ford F15 Raptor to the Baja 1000 to participate in the Stock Full class. This essentially packs 850 miles of the most brutal driving possible into a day and a half time period – and the factory-stock Raptor roared across the finish line in 3rd place in the Stock Full class.

“We’re completely thrilled at how well the all-new F-150 Raptor performed throughout the Baja 1,000 race as it’s one of the most brutal environments you can ever compete in,“ said Ford’s Global Performance Vehicle Chief Engineer Jamal Hameedi. “Having race-proven, real-world performance experience and data to validate – further solidifies Ford’s truck leadership position and Raptor as the ultimate from-the-factory high-performance off-road truck.”

2017 Raptor VS Baja
While the 2017 Ford F150 Raptor raced the Baja 1000 in the Stock Full class, it should be noted that it wasn’t quite identical to the trucks you will see at your local dealership. The Raptor campaigned by Foutz Motorsports was fitted with a handful of safety features, including a roll cage, racing seats with harnesses, a fuel cell and a bunch of lights around the outside which would blind other drivers on the road – but which are essential when racing through the dark desert. These safety items add weight, so the suspension setup has been tuned to accommodate for the extra weight, but in every other way, the Raptor which raced Baja was mechanically identical to the production trucks sold to the general public.

The Baja 1000 is a brutal race, so the vast majority of the 270 vehicle field were purpose-built race cars, trucks, motorcycles and ATVs, but the 2017 Raptor was joined by four other vehicles in the Stock Full class. This included a Hummer H1, a previous generation Ford SVT Raptor F150, an early 1980s Dodge Ram with a Cummins engine driven by drift legend Chris Forsberg and a Toyota Tundra (I have been unable to find more information on this Toyota).

Of these 5 trucks in the Stock Full class, only 3 finished – with the old school Dodge and the previous generation Raptor failing to make it to the finish line. However, Greg Foutz was able to complete the race in 35 hours, 35 minutes and 32 seconds – about 3 hours behind the class-winning effort turned in by Rod Hall in the Hummer H1.

Overall, the Foutz Motorsports 2017 Ford F150 Raptor finished 142nd out of 270, in a race where 128 vehicles didn’t finish at all. Best of all, while the rest of the teams were strapping their vehicles into or onto the trailer, the Foutz team loaded their tools into the back of their race-driven Raptor and drove the high performance F150 some 400 miles back to their home base.

“That’s why the new Ford F-150 Raptor is bad-ass! It’s a race-proven off-road monster that can race off-road an entire weekend, then take you and your friends on a road trip the next day,” Greg Foutz said. “That and the $49,520 starting price make it a clear winner on the showroom floor.”

So, if you have any question on the toughness of the 2017 Ford F150 Raptor, we know that the key components are tough enough to make it from start to finish in the Baja 1000.