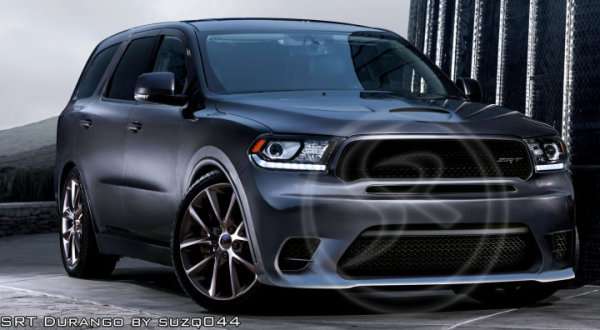 This is the SRT Dodge Durango We All Want

The Dodge Durango SRT shown above is a rendering posted by an artist on Allpar.com, but in speaking with a handful of FCA insiders, it is my understanding that the newest Dodge SUV will look a great deal like this – and it is going to be the high performance Durango that Mopar fans have been demanding for years.
Advertisement

There have been some spy shots showing what appears to be a test mule version of the long-rumored Dodge Durango SRT, but SUZQ044 from Allpar.com posted this awesome piece of work above, showing her expectations for the highest performance Durango. Evidently, her work is close enough to the real thing that a few of my insiders informed me that this SRT Dodge SUV isn’t exactly perfect, but it is “very close”.

SUZQ044’s SRT Durango
If you are familiar with the 2017 SRT Jeep, you probably find the styling cues of this Dodge Durango SRT rendering to be very familiar. This Durango has a front fascia which is clearly inspired by the new SRT Grand Cherokee with a larger central vent in the lower fascia joined by a smaller vent on each side. This fascia extends much further down than that of the Durango R/T, so when combined with the crosshair-free grille and the standard Durango LED-trimmed headlights – this Durango has the angry face of a proper Dodge performance model.

This rendering of the SRT Durango also has a hood which incorporates the vents of the current SRT Jeep with the front-facing scoop of the Hellcat Charger. I expect that the SRT Dodge Durango will have those vents, but I would be surprised if it gets the Hellcat-style scoop.
Finally, from looking along the side of this Dodge Durango SRT, we can see the 20 inch wheels from the Challenger R/T Scat Pack and a stance which is far lower than the Durango R/T. I don’t know if the Durango SRT will wear Scat Pack wheels, but I would expect some style of sporty, lightweight wheel wrapped in high performance tires.

Finally, the rear end of the Durango R/T is sporty enough to “work” for an SRT model, so Dodge could leave that aspect alone – with the exception of some big 3 inch exhaust tips poking through the rear fascia.

SRT Jeep Performance in a Durango
In terms of performance, I expect that the Dodge Durango SRT will offer the same level of performance as the current Jeep Grand Cherokee SRT. This includes the 392 cubic inch Hemi with 475 horsepower and 470lb-ft of torque, mated to the 8-speed automatic transmission and the same electronic four wheel drive system as the high performance Jeep. The SRT Durango will almost certainly have an adaptive sport suspension setup and some big Brembo brakes, along with a uniquely tuned steering system that offers more of a sports car feel.

More importantly, as FCA positions Dodge as a high performance brand, this SRT Durango will fill one more slot in the American performance world.

We know that an SRT Durango is coming, we are pretty sure that it will look a great deal like this SUV shown here and we are pretty sure that it will offer all of the same performance attributes as the current SRT Jeep Grand Cherokee – we just don’t know when this SRT Durango will become a production reality. However, when official news does drop, you will find it here on TorqueNews.com.