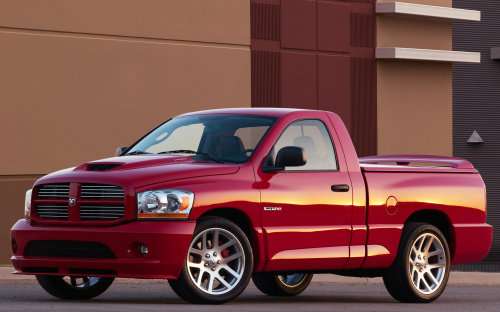 During a small media briefing this weekend, TorqueNews had a chance to talk to SRT CEO and President Ralph Gilles about the future of the high performance brand’s lineup as well as their stance on competing with the bestselling vehicles in the class.
Advertisement

While it didn’t come as much of a surprise when the vehicles formerly known as Dodge Trucks became the Ram Truck brand, when the Chrysler Group formed the multi-brand SRT Group earlier this year – it marked the first time that any automaker had put together a high performance brand comprised of vehicles from multiple brands. In addition to being a unique brand, the SRT group is taking a unique approach at advertising; using the SRT High Performance Tour to put the cars right in front of the brand’s target audience rather than relying on typical advertising venues like television commercials.

After CEO Gilles spoke about the exciting new marketing tour running for three months with stops around the US, he opened the floor to the small group of local media. Automaker big wigs are never willing to speak about future products but Ralph Gilles - as someone who is not just an executive but also a rabid enthusiast – is usually to offer some small tidbits of information about future products. As a Ram owner and someone who loves high performance pickups, I asked Mr. Gilles if the newly formed SRT Group saw a business case to produce an SRT-level Ram pickup.

Gilles explained that they are aware that there is some demand for a high performance Ram pickup and that there are individuals within the Chrysler Group (as well as consumers writing in to state their wishes) who think that the Ram Truck brand should have an SRT variant. Gilles was careful not to give away any information on future products but he ended by saying that “if we do make (an SRT Ram), we will do it right this time”.

Earlier in the discussion, while discussing the future of the high performance SRT brand, Gilles commented that once the Viper hits in the spring of 2012, there will be 5 vehicles in this unique group. He also commented that in the history of the SRT Group (you can learn more about that by clicking here to check out DriveSRT.com), there were some vehicles that they wouldn’t do again if given the chance. He didn’t go into any detail as to which of the vehicles didn’t prove to be up to snuff but he did mention that while lots of Mopar enthusiasts loved the short cab/short bed Ram SRT10 powered by the Viper V10 engine backed by a manual transmission; the Quad Cab version of the Ram SRT10 that was available only with an automatic transmission was not as popular.

Based on that comment and his point about “doing it right”, one would assume that any new SRT Ram would not offer the conveniences of the Ram SRT10 Quad Cab – instead focusing on high performance first and towing ability second. Also, it would be interesting to see if future SRT Ram trucks would feature the high performance V10 from the Dodge Viper lineup or instead, SRT would continue to lean on the 6.4L, 392 cubic inch Hemi V8 found in the rest of the 2012 SRT lineup. With 465 horsepower (in the 2012 Jeep Grand Cherokee SRT8), the 392 Hemi would be more than enough power to make a new Ram 1500 one of the baddest trucks on the road and unlike the original Ram SRT10 – a Hemi-powered Ram SRT8 would likely be afforded the same towing abilities as the sport Jeep SUV.

The short of that all is that in the next few years, the SRT Group just might have a new high performance pickup that would allow truck lovers a chance to go head to head with some of the best performance cars in the US – and win.