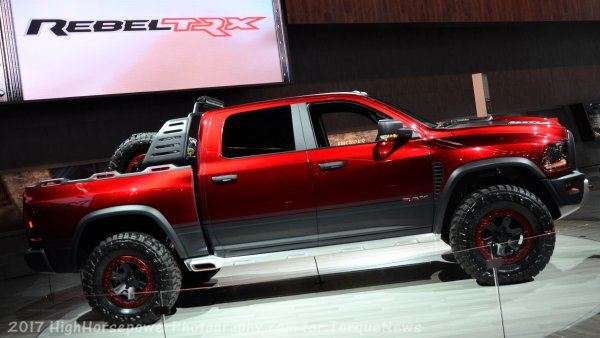 See the Hellcat-Powered Ram Concept at the Detroit Auto Show

Although Ford is using the 2017 Detroit Auto Show to introduce their refreshed 2018 F150, no trucks are better represented in the Motor City than the Ram Brand trucks – which has a big section packed with different types of vehicles to draw in truck lovers of all kinds, including the Hellcat Hemi-powered Ram Rebel TRX Concept.
Advertisement

FCA surprised pretty much everyone when the company didn’t bring any sort of big debut vehicle to the 2017 North American International Auto Show in Detroit’s Cobo Hall. Debuts are usually the key draw for an automaker, but rather than relying on some brand-spanking-new car, truck or SUV, Dodge, Chrysler, Fiat, Jeep and the Ram Truck brand are all drawing fans with high energy displays packed full of their most popular models.

This brand-by-brand approach creates distinct displays for each lineup and as a result, the Ram Truck brand area is packed with the most diverse spread of large trucks in attendance at the 2017 Detroit Auto Show. Most importantly, at the rear of the Ram Truck section is the Ram Rebel TRX Concept – packing a specially tuned version of the 6.2L supercharged Hemi known as the Hellcat in the Dodge lineup.

Detroit’s Ram Truck Display
The Ram Truck brand is nestled in the rear corner of Detroit’s Cobo Hall with the rest of the key American FCA brands, with Jeep on one side and a dividing wall separating Ram from Ford on the other side. Thanks to this design, attendees with either stroll in from the Jeep display, or they will enter from the front – which is the real money shot of the Ram Truck display.

At the front edge of the Ram display is the awesome new Ram 2500 Power Wagon, perched high on a unique platform which is designed to allow the truck to rest with the suspension articulated in different ways. Next to that hovering Power Wagon is a loaded Ram 3500 Laramie Limited, showing the rugged side and the plush side of the Ram brand in their two most extreme forms.

As spectators move further into the Ram Truck display, they will find a big collection of current production models, offering a look at pretty much everything that the brand has to offer. There is a new Ram Rebel Black edition, a loaded Ram 2500 with the Cummins Turbo Diesel, a Ram 1500 Limited with the EcoDiesel, a Ram 1500 Sport and even a Ram 4500 with a dump bed mixed among the group of FCA’s trucks – including the ProMaster and ProMaster City.

As spectators get to the rear of the Ram Truck display, they reach the crown jewel – the Ram Rebel TRX Concept. This truck debuted at the Texas State Fair and you might remember it as the Ram 1500 Concept with the supercharged Hellcat Hemi. The Ram Rebel TRX Concept drew attention for its power plant, but this truck has been elaborately modified so that it draws crowds with the hood shut. On top of the custom body bits, the beadlock wheels, the sport bar in the bed with a race-style tire carrier and the high performance suspension setup, the Ram Rebel TRX Concept is finished in a brilliant deep metallic red paint that would allow this beast to draw attention even if the engine bay was empty.

So, if you love trucks – whether they are off-road trucks, street trucks, work trucks, luxury trucks or a supercharger super-truck concept – the Ram brand is one display that you shouldn’t miss at the ongoing 2017 North American International Auto Show in Detroit.