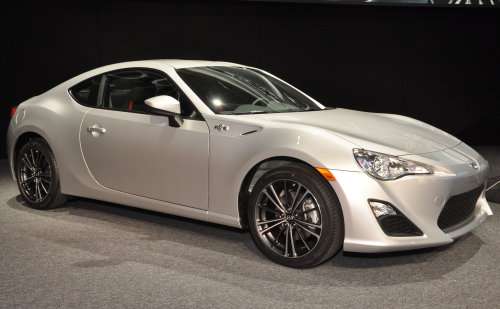 When the new Scion FR-S goes on sale on June 1st in the United States, Toyota Motor Co expects that it will be a big seller – forecasting 10,000 units sold through the end of 2012 and 20,000 examples of the affordable sports coupes sold through 2013.
Advertisement

While speaking with Ward’s Auto, Scion CEO Jack Hollis stated that the niche automaker expects to move at least 10,000 units through 2012 from when the new Scion FR-S goes on sale June 1st. Scion has only received 1,243 pre-orders for the new sports coupe but they’ve received around 27,000 requests for information on the new vehicle when it becomes available. Based on that, Hollis expects to be able to sell every FR-S that they can have shipped to the US from the production plant in Japan. Unfortunately for Scion and those hoping to get their hands on an FR-S right away, with the production facility also building the Toyota GT86 and the Subaru BRZ – both of which will carry higher price points – Scion may have a hard time meeting the early demand.

In contrast, Subaru only plans to sell between 5,000 and 7,000 versions of their BRZ sports coupe which shares every feature shy of the badging with the FR-S. Subaru is more of a niche brand of its own, with that group having more interest in the all wheel drive turbocharged sedans that the company is more well known for so there could be less interest from the Subaru world. However, considering how much interest there is in the motorsports world from the Scion community and the fact that the FR-S will serve as the range topping sports model – the FR-S could potentially hit those goals for 2012 and 2013.

While the 2012 Scion FR-S enters the American auto industry as the bargain brand’s most expensive model, it is still among the lowest price rear wheel drive sports cars on the market with a price starting just over $24,000. When looking strictly at rear wheel drive, 2-door sports cars in the US market, the main competitors are the Ford Mustang, the Chevrolet Camaro, the Dodge Challenger, the Hyundai Genesis Coupe, the Nissan 370Z and the Mazda Miata. Compared to that group, the $24,000 Scion FR-S is less expensive than certain packages from Mazda (hard top Miata versions start close to $28k), all Hyundai Genesis Coupes, all Nissan 370Z coupes, all Dodge Challengers and all of the V8 powered Ford Mustang coupes and Chevrolet Camaro coupes. The open aired Mazda Miata, the Ford Mustang V6 and the Chevrolet Camaro V6 all carry low base prices than the Scion FR-S.

Scion told Ward’s that they believe that there is a fairly small market for lightweight, rear wheel drive sports coupes but when you look at that list that includes the American heavy hitters and the incredibly impressive 2013 Hyundai Genesis Coupe – it will be interesting to see if the Scion community can generate enough enthusiasm to sell 10,000 FR-S sports coupes in 2012 and another 20,000 in the years after. The Scion FR-S might be lighter and more nimble than some of those other cars in the class but in the end, the FR-S faces a massive gap in horsepower compared to the other rear wheel drive 2 door sports coupes in the American market. The FR-S packs more power than the Mazda Miata but after that, every other vehicle in the class offers considerably more power with the closest being the Hyundai Genesis Coupe 2.0T with 274 horsepower to the 200 horsepower offered by the FR-S.

The Scion FR-S will carry a low starting price and what many expect to be incredible handling properties but will 200 horsepower be enough to satiate the power-hungry American public? We will soon see just how popular the new Toyota/Subaru joint sports cars are when the FR-S hits US dealers on June 1st.