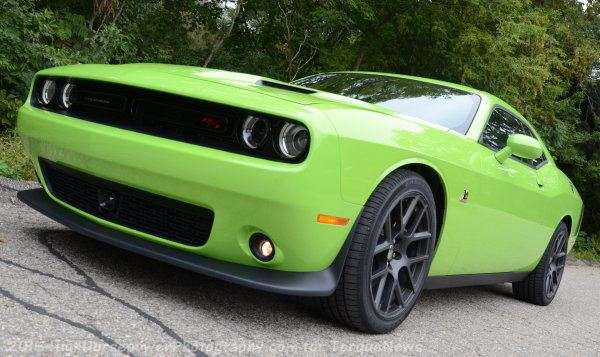 A recent report stated that the 485hp Scat Pack model of the 2015 Dodge Challenger was sold out and while there are some examples of this incredible performance car bargain available at dealerships – this is quickly becoming almost as tough to get as the 707hp Hellcat Challenger.
Advertisement

While speaking recently with Automotive News, Dodge boss Tim Kuniskis stated that the 2015 Dodge Challenger R/T Scat Pack was sold out and with the popularity of this 485 horsepower model that has a price starting under $40k, I wasn’t surprised to hear that the supply was running so short. I did some checking around my local Dodge dealerships and I discovered that there are some Scat Pack Challengers available, but they seem to be only slightly more available than the Hellcat Challenger.

Get Your 2015 Scat Pack ASAP
If you have been saving up your pennies to buy a 2015 Dodge Challenger R/T Scat Pack late in the year, presumably with a deep discount due to the arrival of the 2016 models, you might not want to hold your breath. I know several people who have waited for specially ordered Scat Pack Challengers this year, but with Kuniskis’ comment about the Scat Pack being sold out, I have to wonder if the rest of the production allotment of 2015 Scat Pack Challengers is spoken for. If it is, the only way to get one at this point is to find one available for sale at a Dodge dealership.

The good news is that it didn’t take me long to find a handful of 2015 Dodge Challenger Scat Pack models in the Metro Detroit area, so they are available – they are just getting increasingly harder to find.

Due to the limited availability of the 2015 Scat Pack Challenger, I wouldn’t expect to see many of the 485hp models sporting deep discounts when the 2016 models arrive, simply because there won’t be many left – if any. With this package being such a great performance value at MSRP, they are selling very well and a high demand removes any real incentive for the dealerships to flex at all on the price. Fortunately, in searching for a 2015 Scat Pack model, I saw a great many other 2015 Challenger models in other trimlines which will likely see big discounts when the model year change comes later this year.

Look for Discounts on SXT and R/T Challenger
In searching the websites of my local Metro Detroit Dodge dealership, I saw very, very few Hellcat or Scat Pack models, as well as very few SRT 392 models. Considering that the SRT 392 is the drivetrain of the Scat Pack package with the handling, braking and interior goodies of the Hellcat models, it doesn’t come as much of a surprise that there aren’t many SRT 392 models sitting around.

On the other hand, I did see a great many 2015 Dodge Challengers in the SXT and R/T trimlines. These are the least expensive models in the Challenger family and with so many still available in the Detroit area, I wouldn’t be surprised to see a surplus of these models when the 2016 models arrive – which would lead to even lower prices for the 305hp SXT and the 375hp R/T models.

There are also a surprising number of 2015 Shaker Challengers with both the 5.7L and 6.4L Hemi, but with these models arriving the most recently of any of the trimlines, I wouldn’t expect to see huge discounts on these specially designed models with their retro-inspired Shaker hood.

rick wrote on December 13, 2015 - 11:42am Permalink
how many 2015 scat pac challengers produced? I have a black/pearl with manual trans with 2500 miles for sale. Vehicle has not seen rain or snow. Car is stored for winter
rick braun wrote on January 15, 2016 - 1:53pm Permalink
interested in selling